The Robert Glasper Experiment at The Roxy 2/8/13

I’ve always prided myself in being a jazz aficionado.  I’ve tried to educate myself in the history (I’ve watched Ken Burns’s documentary twice) and cultural significance (I wrote my senior Anthropology paper on the influence of Jazz Music on society and culture) of Jazz Music.

I don’t listen to much radio these days, and the music that I “discover” tends to be through word of mouth.  I’m a Jill Scott fan, and one day she posted a tweet that caught my attention: 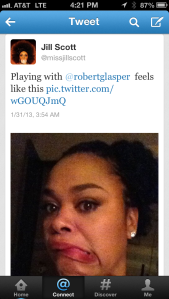 Now, I had heard good things about Robert Glasper (I knew that he was nominated for a 2013 Grammy), but I really didn’t pay too much attention to his music, so this tweet caught my attention.  I mean, Jill Scott is so incredibly talented, that if another musician were to give her musical fits, that musician MUST be as, or more, talented than she.

I started pulling up some video from YouTube, and was instantly hooked.  It was like a modern day version of Guru’s Jazzamatazz albums.  I noticed in one of the YouTube videos a link to purchase tickets to an upcoming show he was to have at the Roxy, and with the Grammy’s that same weekend, I thought it may be a good idea to purchase a couple of tickets to catch the his show.  After all, his latest album “Black Radio” had tons of features on it, and who knew how many musicians may have decided to swing through that evening.

I went to the show with a friend, and I’m glad I bought tickets ahead of time  I smirked a little bit when the people in front of me in the box office line were told that tickets had sold out.

We got inside while DJ Shafiq was spinning, and were relaxing comfortably when Taylor McFerrin took the stage.  It was my first time listening to Taylor McFerrin’s music. He’s a talented producer/vocalist who is signed to Flying Lotus’ Brainfeeder Label. His show consisted of a freestyle improvisation where he riffed on a vocal pattern, stored it in his computer module, and looped it while playing keys or singing over the looped elements.  All of a sudden, he started to sing Bobby McFerrin’s “Thinkin’ About Your Body”.  I mentioned it to my friend in passing.  It wasn’t until the next day that I realized he was Bobby McFerrin’s son. LOL.

After Taylor’s set, The Robert Glasper Experiment took the stage. 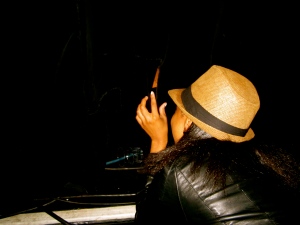 My friend trying to sneak a peek of the Robert Glasper Experiment setting up.

The set was amazing.  I do not, unfortunately, know all of Robert’s music by heart (yet), but I think that they MUST have played the following songs, because the featured artist’s came on stage to perform as well:

And although they weren’t featured on any of the tracks on “Black Radio”, Marsha Ambrosious and Elzhi (of Slum Village) stepped up to the stage to perform as well.  Ms. Ambrosious was kind enough to snap a picture of me after her set.

The vibe and setting in the Roxy was intense.  Whenever the band started going off an a jazz riff, I kept thinking to my self, “This is what it must have felt like to be at a John Coltrane or Miles Davis show, back in the day.”  People were entranced.  The music enraptured.

The Robert Glasper Experiment performed with an intensity and focus that is impossible to measure.  The beats were on point.  The solos amazed. The performance was brilliance animated.  Here are a few snippets.

And the kicker was that it was all accessible. Though Jazz is the foundation for American black music, people seem to lack a certain appreciation for it.  This evening, the people in the audience ate it up with a spoon.  Maybe it was because all of the guest artists made it seem to be more of an R&B or Neo/Soul show, but at the heart of it, it was all jazz.  Pure, unadulterated jazz put through an R&B filter.  The results?  Amazing.

The Robert Glasper Experiment won a Grammy the following night.  I’m glad I got to experience the music before the win.