Earlier this year, a friend of mine posted a video clip on Facebook of a performance by a singer named Jose James. I liked what I heard, and started googling him and his music.  When I stumbled upon his amazing cover of Freestyle Fellowship’s “Park Bench People”, I nearly lost my mind.  I mean, I grew up with “Innercity Griots”, and I have always preached how that that album is in my top 10 list of best and most influential hip-hop albums of all time.  What made that album so groundbreaking was how it pushed the limits of hip-hop (at the time), thematically and musically, especially using live jazz instrumentation, courtesy of members from The Underground Railroad (I even got to meet Onaje Murray– who kills it on Freestyle Fellowship’s version of “Park Bench People” in high school once, but that’s another story).  Needless to say, I was feeling what Jose James was doing with his music and the fact that he picked one of my favorite hip-hop songs to cover earned him some mad respect.

While I was watching some of the video clips on Youtube, I noticed that Youtube had a tiny little caption in the video description that showed where he would be performing in Los Angeles next.  I clicked through the link trying to see how much the tickets were, but apparently the show had sold out. Apparently, it was a KCRW promoted concert, and to my dismay, they had just featured Jose the day before, and tickets for the show sold out immediately. Slightly disheartened, I simply “liked” Jose’s Facebook page for updates on when he’d be in town in the future.

Facebook.  Some people can’t stand it.  I can’t live without it. About a week after trying to get tickets, I get a notice on FB that a second show had been added.  I logged on and purchased tickets.  FYI, the ticket for this second show also sold out. Thank you, Facebook.

It had been a tough couple weeks leading up to the show.  Work had been overwhelming, and it seemed that everybody I was working with was heading to South By Southwest to work on various projects. I’ve never been to SXSW, so I was a bit envious.  But since everyone was in Austin, TX for the music festival,  I got a little reprieve from phone calls and emails to enjoy myself for the evening.

When I got to the venue, I picked up my wristband and got stamped at the door. The performance venue was downstairs in a dark basement with low a ceiling. My guest and I roamed the venue looking for a good place to stand, and we ended up basically where we started off, by the entrance, close to the stage right.  The show was scheduled to start at 10pm, but the bouncer at the top of the stairs told me that he started around 11 the night before.

The later it got, the smaller our little space got.  People kept filing in, and the temperature of the room started rising.  You could feel it. Note to self: bring a small handheld fan for the next show I attend there.  The air-conditioning was on (so says the venue), but you couldn’t tell. 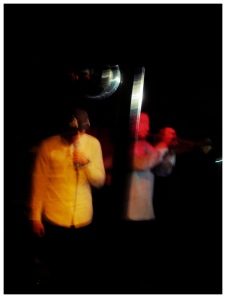 A blurry shot of Jose and Takuya.

Close to 11:00pm, the band the took the stage. One by one, the band members took the stage. Kris Bowers (keyboards), Solomon Dorsey (bass), Takuya Kuroda (trumpet) and Richard Spaven (drums).  Each member introduced themselves to the audience through solos, and after a good 10 minutes of jazz instrumentals, Jose joined them on stage to sing “It’s All Over Your Body”, the first track of off his latest album .  That song is about 5 and a half minutes long, but they jammed out for at least 10 minutes. It seemed to me that the audience truly understood the musicality of the gentlemen on stage. Each of them was truly skilled at their respective craft.

The room was getting hotter and hotter, and if you came in wearing a jacket or a sweater, you weren’t wearing it anymore. You could feel the the body heat coming off of the person standing next to you. You would think that the temperature would be unbearable, but no. Girls were shouting out Jose’s name with each line he sang, and bodies were swaying to the rhythm.  If anything, people were sneakily pushing their way towards the stage, immersing themselves in the sweltering heat.  The music was that good.  No one wanted too leave their spot (at least where I was standing).

Another blurry shot of Takuya.

Jose has preached his musical root as being set in Jazz.  He’s a tremendous “classic” jazz vocalist, as his duet album with Jef Neve, titled “For All We Know”, clearly showcases, but his talent and stylings are so much more that traditional jazz.  Like Freestyle Fellowship, he takes a genre and stretches its boundaries.

People have compared vocals to D’Angelo and Bill Withers.  People say that he evokes the 70’s soul of Gil Scott Heron. As cliched as it sounds, he’s Jose James.  His performance showed me that he is his own style … meaning, if you heard his voice on the radio, you’d probably be able to tell that it’s him and not some other singer.

I usually try to take video clips of a handful of songs of the concert I go to, but after the show I realized that I had only taken clips of three songs.  It was the kind of show where you didn’t want to watch it from the tiny screen of a cell phone.  I was no more than 15 feet from the stage.  I was going to soak it all in with my own eyes.  Luckily, the three videos that I did take were of some of the highlight I took away from the show.

I had seen Robert Glasper earlier this year, and it just so happened that the music of “Vanguard”, one of my favorite songs off the album, was written by him. Jose wrote the lyrics.  Great song.

It was 1am when Jose closed his set with “Do You Feel”, and people started to leave. It’s almost understandable. Almost. After all, it was a Wednesday, and people have 9-5 jobs.  The show was already over 2 hours. I, technically, have a 9-5 job. BUT he hadn’t played “Park Bench People” yet.

After a bit of cajoling from the faithful who moved forward to take up the space from those who couldn’t hang, Jose came on stage and started to sing a cappella a Marvin Gaye medley of “What’s Going On” and “Mercy Mercy Me”.  What he did with the medley blew my mind.  The voice is an instrument, but what he did with his instrument left me amazed. He became the human record player, scatting lines making it sound like a DJ was spinning records.

“What’s Going On” and “Mercy Mercy Me”, with their strong social commentary, segued brilliantly into “Park Bench People”, a song about the ravages of homelessness. He continued the scat passages of “Park Bench People” like he did with the medley and made those songs … for lack of more poetic words … his bitch.  He took a song that I already loved, and left me amazed with his performance.  Close to 1:30am, Jose and the band wrapped it up.

I was able to tell  Jose before I left that I was amazed by his set, and that there was nothing I appreciated more in the world than good music, but upon retrospect the concert itself was a one of a kind experience.  To experience that kind of musicianship, in that venue, with the heat, and skin, and vibe, excitement, and movement … Before I left him and his band alone, I was able to get Jose and Takuya autograph my 12” single of “Park Bench People”.

They say that listening to good music is like having sex. On March 13, 2013, in the crowded, sweltering basement of the Del Monte Speakeasy in Venice Beach, I left a concert drenched in my own sweat (and probably the sweat of others), my feet and legs aching from the physical exertion of standing for over two hours. I was physically and emotionally spent, but absolutely in awe of the performance that I was lucky enough to catch. When I got to my car, I sat there smoking a cigarette just to relax for a moment. 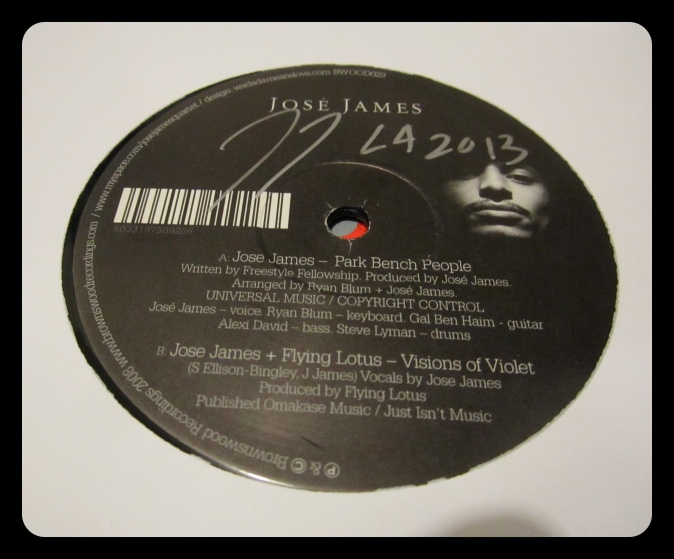 Autographed 12″ single of “Park Bench People”. If you want to see some other music treasure I’ve collected, click through this link.