What’s up with the influx of music festivals invading Los Angeles county this summer? By my count, there are 12 just in the month of August alone! Don’t get me wrong. I love going to concerts, and I love getting a ton of bang for my buck with the local festivals, but sometimes getting out of dodge, and venturing somewhere new, is just what the music doctor would order to get a new perspective on top-shelf music.

For those of you looking to get out of town for a little weekend get-a-away, look no further.

With a line-up curated by Goldenvoice, there are a plethora of stellar acts performing on the three stages over the weekend, and because there are only three stages, there is the opportunity to catch bits, if not complete sets, of ALL of the acts set to perform. 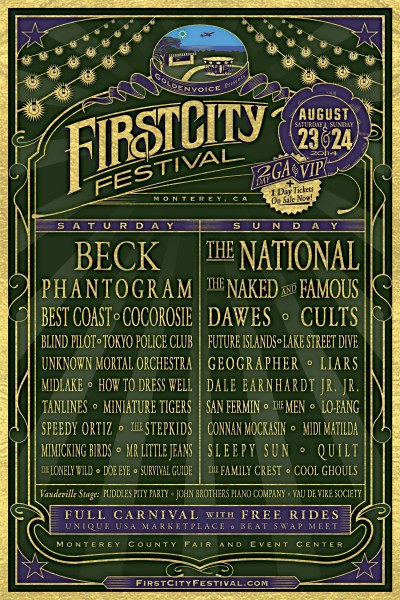 Clearly, Beck, The National, Phantogram and The Naked and Famous will be the main draws for concert-goers, but don’t sleep on supporting acts playing earlier in the day. Here are some bands (in no particular order) that I would highly recommend catching.

This band is awesome live. Their front-man, Samuel T. Herring is a tremendous front-man whose live performance bleeds emotions through his gravelly singing voice, intense dancing and deep stares into the audience. Their latest release, “Singles”, is one of my favorite albums this year, and if you are a fan of new wave/post-punk, revival, I am almost sure that you will be smitten with this band.

Freakfolk, trip-hop, dream pop … call it whatever you want, but this sister duo’s music is airy and refreshingly delicate. Their 2:30 set time would be a great time to picnic on the grassy lawns, kick off your flip-flops and relax.

Tom Krell is a recording artist I simply can’t get enough of. Combining his R&B sensibilities with seriously deep, and emotional, sentiment, his music will move you. If he explains the meaning of the songs he perform, like I’ve seen him do at other performance, I guarantee you will be moved. Performing as How To Dress Well, his latest album, “What Is This Heart?”, is another album that I have on my “best of the year” lists. He should be playing with a full band, and that will only add to the intensity of his performance.

I’ve been meaning to catch this band for a long, long time. It doesn’t surprise me that they are signed to Stones Throw Records. Their sound is a throwback to the soul/funk/jazz sound that a band like Steely Dan had, but with a distinctly modern twist. Funky bass-lines, smooth harmonies with a sprinkling of electronic keys makes this a band I wouldn’t miss.

Combining rock instrumentation with strings and synths, this band’s electro-indie pop is as good as it gets. With only two albums under their belt, they’ve developed a loyal following, and there’s a reason for that …their music is good. Besides the good music, I’m also a big fan of the electric cello Nathan Blaz plays. You don’t get to see that too often in an electro-indie pop band.

Single day ($79.75) and two day passes ($159.50) are still available. CLICK THIS LINK to purchase tickets. The First City Festival website also has accommodation options available, but you can always find a deal for housing through other sites (Expedia, AirBNB, etc). If you and your friends are down for a little weekend getaway, going on a little road trip to a legendary performance venue to catch some awesome bands, for a terrific deal, sure as heck isn’t a bad idea.

My opinion? Wrangle up a few of your friends, get out of town, and do it.