Costumes were encouraged, so I glued on two prosthetic horns, donned black, and carried around a zombie baby in a baby carrier. My friend was coming from another event across town, so me and my zombie baby waited patiently for her to arrive. There were some terrific costumes, and my “baby” definitely started some conversations. When my friend arrived, I made a b-line straight to the merchandise booth to see if there was any exclusive merchandise left. I was bummed to discover that I had missed out on limited edition event posters. 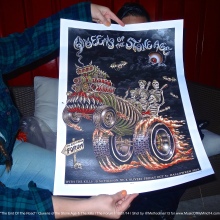 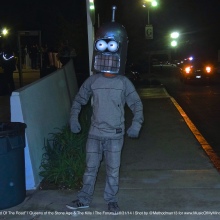 By the time I made my way back to the seats, The Kills had just started their set. Allison Mosshart is such a bad ass front-woman. She sings in the Dead Whether as “Baby Ruthless”.  She is known as “VV” in The Kills

Having the The Kills perform this year was a treat. The last album that they released was in 2011, “Blood Pressures”. They’ve been touring a bit this year, so one can only hope that new material is around the corner. I thought that the sound could have been better mixed for their set, but it was still a thrill to watch them rock the stage. 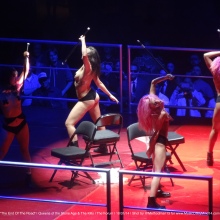 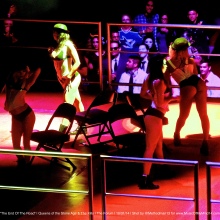 In between sets, the Suicide Girls provided some risqué entertainment for crowd.

I missed out on watching the Queens of the Stone Age’s set at Coachella this year. I was bummed that I didn’t get approved for the photo pit, and I decided to shoot some artist’s who didn’t have photo pit restrictions.

Touring in support of their most recent album “…Like Clockwork“, the Halloween gig at The Forum would be the final show of the tour. They pulled out all of the stops, performing songs from their entire catalogue.

Josh Homme, dressed as a priest, wailed through QOTSA classic, getting some help from Jake Shears (of Scissor Sisters) for “Keep Your Eyes Peeled” and doing a five songs set with former QOTSA bassist Nick Oliveri for an encore. THIS is much better than getting drunk at bar ogling hot, slutty-dressed chicks. 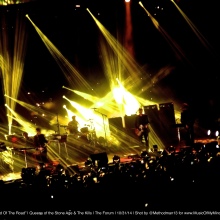 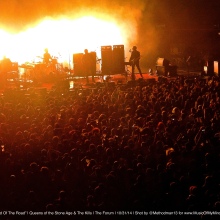 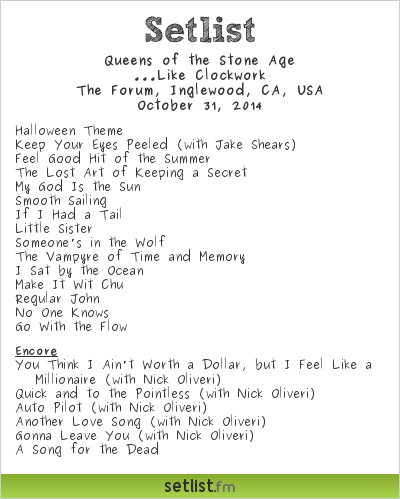