THIS ENTRY WAS WRITTEN 12/9/14 BY A. LEVEL AND IS REPRINTED HERE BY PERMISSION.

There’s one small problem with going to see Boston in 2014: namely, their lead singer died in 2007. Of course, I didn’t actually realize that until after the show. Something had seemed a bit off – and the lead singer certainly didn’t look quite right – but I’d figured he’d ditched his 70s hair and gone for a more modern style. I suppose that’s what happens when you go to see bands whose music you like but whose career you don’t actually follow that closely.

Boston brought outer space into the Forum. (Boston in concert at the Forum.)

Stage design by Google Earth or NASA? (Boston in concert at the Forum.) 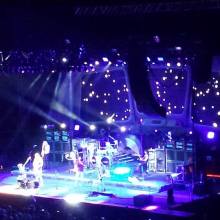 The space theme continued. (Boston in concert at the Forum.)

The opening act was Cheap Trick, which seems to have created a niche supporting bigger 80s bands. They’ve been on enough tours that I’m fairly certain that I’ve accidentally seen them more times than my favorite groups. Only one member seemed ready to rock – the rest looked like they’d come ready to play bocce and sort of shuffled around. You have to give Cheap Trick credit for longevity, but they certainly fall in the category of Bands Who Are Way Past Their Prime.

Between the two sets, this show featured one of the odder moments I’ve seen at a concert. Members of Boston came out on the stage, flanked by fez-wearing Shriners, and made a pitch for two of their favorite charities. They’d apparently sent Shriners all over the Forum to sell copies of their Greatest Hits cds as well as raffle tickets for a signed guitar, with the proceeds going to the Shriners and to Sea Shepherd.

Now, nothing says “militant anti-whaling organization” more than a concert played for an aging audience at the newly-renovated Forum. It’s a venue that seems to be marketing itself these days as the place for Music Old White People Like, with acts like the Eagles. (A fairly big shift after many years of increased disrepair, during which it mostly hosted concerts by rock bands whose audiences were more likely to trash the place.) I also have a soft spot in my heart for the Forum after years of Laker games plus my first concert, which featured the rockin’ stylings of one Neil Diamond. Anyway, a quick glance at their tour dates showed that they did a lot of their shows at tribal casinos, and maybe a raffle seems to fit in more at a venue that’s already primarily devoted to gambling.

We decided that it couldn’t hurt to have a cd, so we set off to find the nearest Shriner. It turns out that in spite of the sparkly red fezes, they’re surprisingly hard to spot in an area full of red seats. By the time we cornered one, he had sold all of his raffle tickets, but we managed to snag a cd. My companion threatened to listen to it on a loop all summer, though I politely declined her offer.

On screen: view from a cockpit.
On stage: was that thing a gong? A giant steering wheel? Frisbee?
(Boston in concert at the Forum.)

Soon, Boston took the stage with a set that covered their greatest hits and made the audience happy. Though I enjoyed the night overall, the tech did distract me a bit from the performance. The screens in the background looked like cockpit windows, and it turned out that their stage designers had taken the space theme of the Boston cover art a bit too seriously. Every video swooped through the air for the duration of the show, soaring through clouds, constellations, and images of Earth in space. It had more in common with Disney’s Soarin’ Over California ride than with your average concert video. By the end, I was a little queasy and wished I’d taken some Dramamine. At other 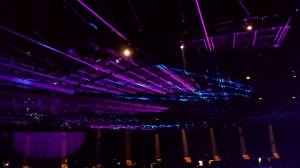 Boston brought the roller rink flashbacks. Everybody free skate!
(Boston in concert at the Forum.)

points, the lighting looked like it had come straight out of a roller rink circa 1985. They’d also taken pains to light the venue ceiling with sparkly moving constellations so that it seemed like the night sky was above us. Considering that the number of stars you can normally see in the Los Angeles sky is somewhere south of 20, it felt as unreal as the flying videos. Still, I found myself staring at the ceiling, checking out the stars like I was a cat fascinated by a laser pointer.

The music sounded great, real lead singer or no, as they rolled out the songs my sister had introduced me to as a kid. The only off note was the inclusion of a guest performance by Siobhan Magnus from American Idol; she seemed out of place, and we couldn’t figure out the point of including her in the tour. While music purists can debate the value of seeing bands in their “real” format, I’m not that kind of fan. A friend once teased me for going to see shows like an Everclear concert with so few remaining original members that he nicknamed it “Frankenclear,” but I’m more interested in the overall sound and the live experience. In this case, the venue was great, the production was just wacky enough to be entertaining and memorable, and the band put on a fun show. In terms of value for price, Boston put on one of the better concerts I’ve attended this year. 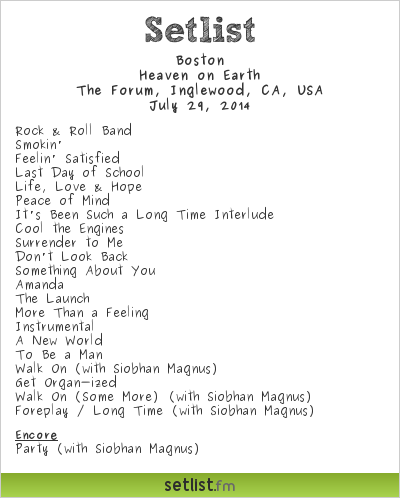