Sunday was the final day of the BET Experience, and it had been the one-day that I was particularly looking forward too.  I got to the venue early (this time I actually had an artist pass!) entering the venue from the artist’s entrance.  I was able to freely walk around the Staple Center to check out it’s nooks and crannies when all of a sudden I noticed that R. Kelly was opening the evening. 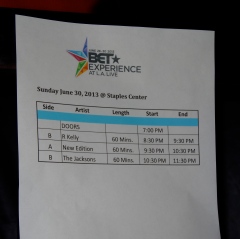 This was a bit confusing, as I thought he was billed as the headliner for the evening. I mean, don’t get me wrong, The Jackson and New Edition are popular, but c’mon … R. Kelly’s fan base tends to prove that he’s just a tad more popular, and should have been the artist closing the evening- and weekend- out. I had a feeling that the awkward lineup would result in the audience members leaving the concert early… but we’ll get to that later.

My friends and I watched the end of the BET Awards that was being televised on the huge stage screens in the empty arena, and we made our way backstage once the doors had opened. Apparently, BET had scheduled it to have R. Kelly transition from his performance across the street at the Nokia Theater to his opening set at the Staples Center.

Backstage passes are cool, but they don’t always get you the best view. I was able to sneak myself in with the press corps for evening and stood with professional photographers with beautiful cameras and long lenses while I stood there with my pocket-sized Sony Cybershot G. 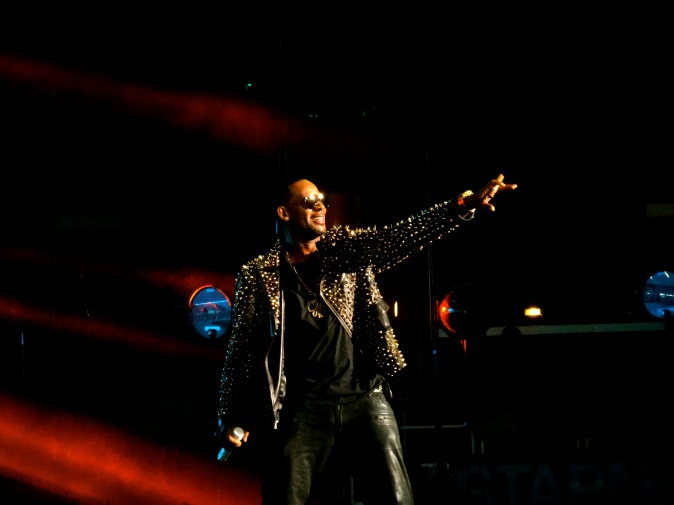 Kelly took the stage, with a hit us with a chart topping catalogue spanning over 20 years.  For the next hour and 15 minutes, he gave us a little reminder as to how he’s been able to stay in the game for so long. It was a barrage of hit after hit after hit.

Starting from off stage singing a cappella, “Ooooh, are you ready for a show? If you’re ready put your hands up in the sky.” “Ignition (Remix)”, “I Wish”, “Bump N’ Grind”, “R&B Thug”, “12 Play”, “Step In The Name Of Love”, “I Believe I Can Fly”. He did snippets of ALL of his hits in the short time period he had.  He could have, and should have, had a full two hour set so that he didn’t have to cut a lot of the early songs in his set short. 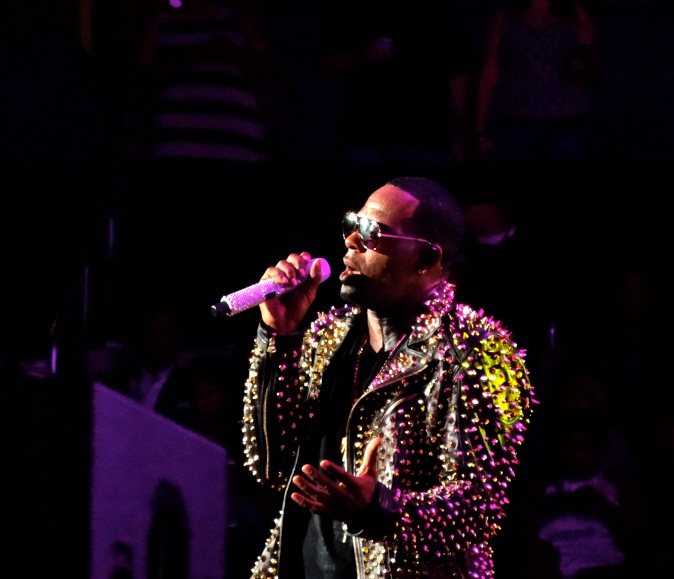 Up next was New Edition. Ronnie, Bobby, Ricky, Mike, Ralph and Johnnie too. They were all there. “N.E. Heartbreak was a cassette that got a lot of plays on my tape deck, and I was overjoyed to hear them perform a couple of the stand out tracks from that album (i.e. “Can You Stand The Rain”). I had to miss a couple songs from their set as I had to meet up with someone briefly for work, so I couldn’t get the best pictures or video, but I was still excited with what I saw. 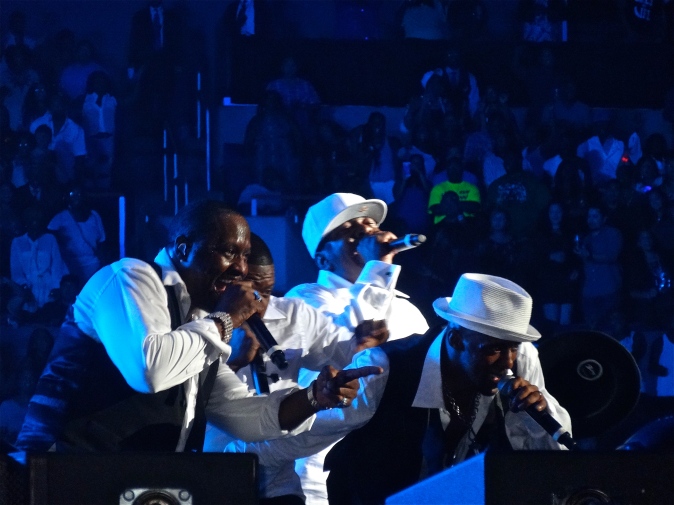 I was even more excited when each member(s) were given time to shine by singing their own solo hits.  Johnny Gill sang “My My My”. Ralph Tresvant sang “Sensitivity”, “Bell Biv Devoe” sang “Poison” and “When Will I See You Smile Again”. Bobby Brown sang “Roni”.  Now “Roni” got me for a minute, because I did have a summer school girlfriend with that name back  in the day. In that moment, I was really back in middle school/high school. The ladies I was standing next too got a pretty big kick of watching me sing along with all of the songs.

I felt bad for the Jackson. The show had been running a little late to begin with, so when they started their set it was already 11:00pm. For the fans who stayed, the Jacksons performed spirited and moving numbers like “Blame It On The Boogie”, “I Want You Back”, “The Love You Save” and “Gone Too Soon”.  “Gone Too Soon” was particularly poignant as huge images of Michael appeared on the giant stage screens. I felt bad that a large chunk of the audience had head home, but it was late, and the weekend had been long. And although it may have felt a touch anticlimactic having them close it out, they still put on a hell of show and I can at least say that I was able to the brothers (sans Michael) perform together.

After the Jacksons, I had to meet up with my friends one more time at the Chairman’s Lounge. I was taking my sweet time getting there, hoping that I’d have some good last minute photo ops … And there was Bobby Brown.

I could feel that he wasn’t really down to take a picture, but I just kept talking about how I  used to date a girl when I was in middle school whose nickname was “Roni”, and how I used to sing that song all the time ad nauseum. I don’t think he was really paying attention, but I got the picture …. And with that, my BET Experience was complete.