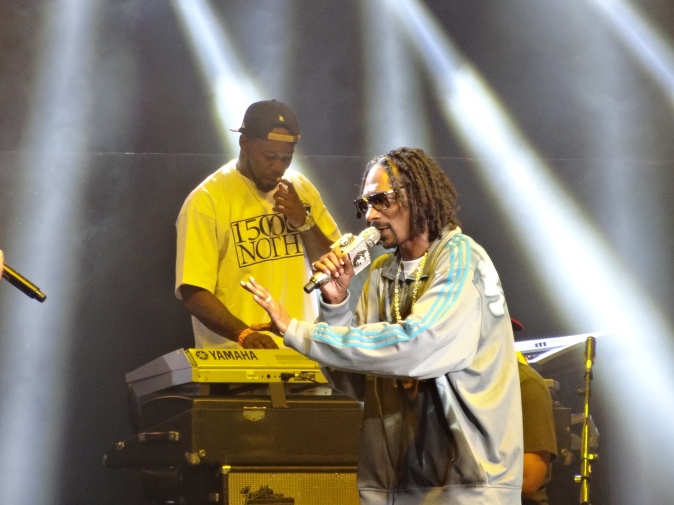 I woke up Saturday morning still in a daze from The Mrs. Carter World Tour performance that Beyonce put on at Staples the night before, but I still had two more full days of music ahead of me.

BET set up an outdoor venue they dubbed the “Music Matters Stage” where “the stars of tomorrow shine today”. Some of the acts in years past have included Miguel, Melanie Fiona and J. Cole, so I decided to take a look at the schedule to see who was performing that day. Ummm… Marsha Ambrosius at 1:15pm? Damn. I was actually a bit surprised to see her scheduled to perform because in my mind she’s already a Grammy Award-winning star of today, both as a member of Floetry and her solo career.

I checked my emails and noticed that there were some items that needed some attention, so after spending a greater portion of the morning and early afternoon slaving away at the computer, I realized that I wasn’t going to make it in time to see Marsha Ambrosius perform.

After I had pushed “send” on the last work email that Saturday, the Scorpio in me made a rather impulsive decision. “Gee,” I told my self, “it’s such a nice day! Why don’t I try taking public transportation from West Los Angeles to downtown Los Angeles? I could use the exercise”. I threw on my clothes and my credentials, and started the journey. One bus, one train without air-conditioning and an hour and a half later I got to my destination. Wasn’t so bad, but I did take a little longer that I had anticipated. 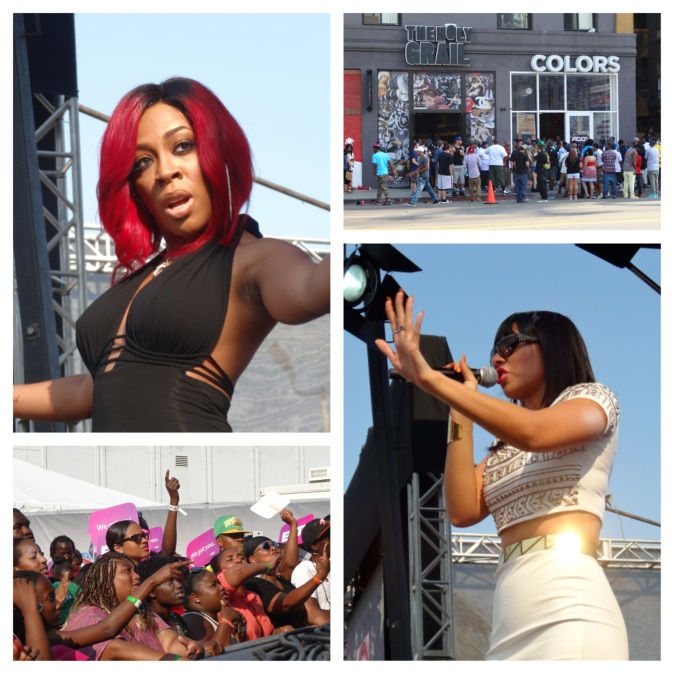 The area around the heart of the BET festival was buzzing with activity. I looked at my watch, and noticed that I probably could catch one or two acts before I had to head over to the restaurant for dinner. I walked to the Music Matters entry area and flashed my credentials, and thereafter made a b-line to the main stage where Bridget Kelly was performing. I wasn’t too familiar with her catalog, but I seemed to be the only one who didn’t as it everyone at the stage to watch her in the blazing summer heat were singing along.  She did sing a respectable cover of the Lauryn Hill classic “Ex Factor”. I knew that song.

The next artist who graced the stage was K. Michelle.  I never watched and episode of  Love and Hip Hop: Atlanta  , but apparently K. Michelle is a featured cast member.  After gaining media exposure through the reality show, she was able to land a deal with Warner Bros. Records. Like Bridget Kelly, K. Michelle’s fans were there in full force, standing in the sun, and singing along with almost all of her songs.

I had to leave the Music Matters Stage before K. Michelle finished up her set, but I was glad that I was actually able to make use of the “Event Staff” pass I had been wearing around my neck to enjoy some of the non-featured music being offered during the weekend. 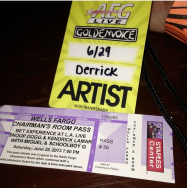 The artist pass that I had for 45 minutes. lol.

At dinner, I was given an “Artist Pass” for the Staples Center shows that evening.  Forty-Five minutes later, the powers that be asked for the pass back.  Apparently, a real artist needed it, so I had to surrender the laminate for the evening.  I guess someone else was “Derrick” for the evening. Lol. I wish the team had told me who it was.

Dinner took a little longer than expected, so by the time I got inside of the Staples Center, Schoolboy Q and Miguel had already finished their sets. By the time I had made my way to my seat, J. Cole took the stage. 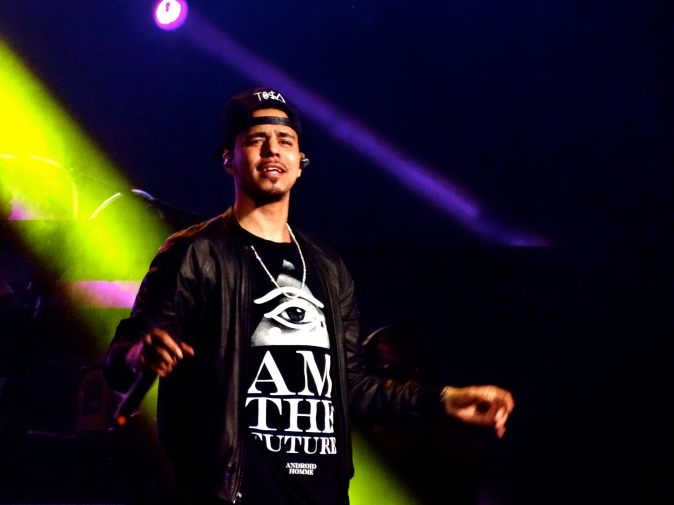 I know very little about J Cole, other than the fact that his latest album was released the same week as Kanye’s “Yeezus”, and that his record sales for that week second only to Kanye’s. I tried to get into the music, but I found myself being easily distracted with people watching or trying to figure what samples were used in his songs. It seemed that a lot of his crowd pleasers relied on familiar melodies. A few songs into his set, J. Cole looked around and wondered aloud, “Is this how Kobe feels?” The crowd went nuts and he continued his eloquent, if not somewhat monotonous, flow.

After J. Cole’s set, I quickly made my way to the “Chairman’s Lounge” (at least they didn’t take that ticket away from me) to get free drinks. I was sober the night before, but tonight I wasn’t driving, so I decided to double up on the beverages.

I was getting excited to seen Kendrick Lamar take the stage. For anybody who has asked me recently, I’ve been saying that my two favorite hip-hop album purchases in the past year have been Killer Mike’s “R.A.P. Music” and  Kendrick Lamar’s “Good Kid, M.A.A.D City”.  I remember the first time I popped in “Good Kid”.  It was the first CD I unwrapped in the Amoeba records garage, I popped it in, and started a weekend commute.  I didn’t have to fast forward over any tracks. After the disc restarted, I listed to the tracks 2-4 at least two more times:  “Bitch, Don’t Kill My Vibe”, “Backseat Freestyle” and “The Art of Peer Pressure”.  Solid production. Solid lyrics. Super dopeness. 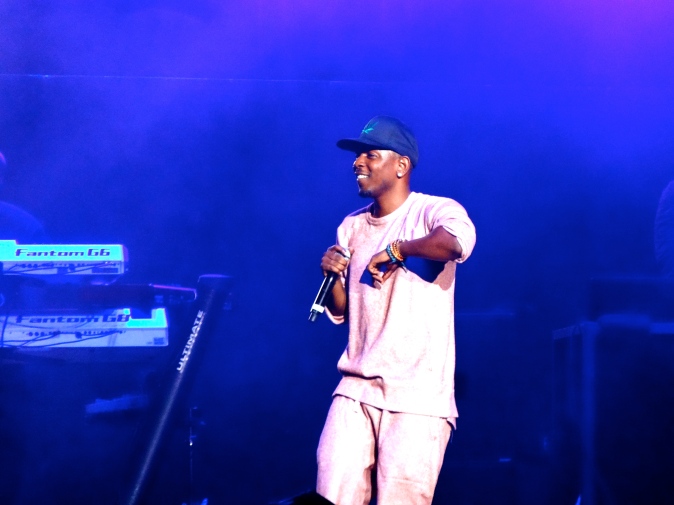 I saw on the stage monitors that Kendrick was starting his set, so I asked to get my scotch topped off, and I head back to my seat. I had heard from various people that Kendrick’s live show could be, at times, boring, but I would have to beg to differ. Based on what I saw that evening, I saw Kendrick perform with a sense of immediacy. Maybe it was because he was performing in front a hometown crowd, or maybe he’s just evolved his stage presence through the relentless tour he’s been on this so far this summer, but whatever the impetus, he was deep into the performance, spitting out lyrics and meaning with every breath. With the live band providing solid support, Kendrick killed his set. The comedic highlight when Mike Epps danced around on stage had everybody rolling off their seats. 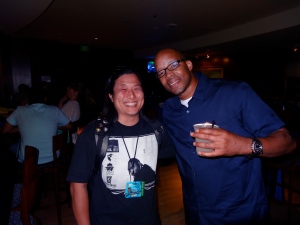 I again went back to the Chairman’s Lounge to get another drink. By this point, I’ll admit, I was pretty tipsy. As I was ordering my drink, I saw Warren G. I’ve been around him before, but I think the scotch may have gotten to me. I approached him and started to blab about how much I loved his music. I told him that I was a huge fan of his album “In The Mid-Nite Hour” and that the tracks with Nate Dogg, “I Need A Light” and “In The Mid-Nite Hour” were, in my mind, classics. I fumbled around with my camera and we snapped a picture when he looked up to the stage monitor and noticed that Snoop had taken the stage. Looking at the TV he announced, “I got to go,” and with that he left the lounge in a hurry. He made it back in time for “Regulate”… that was a relief. 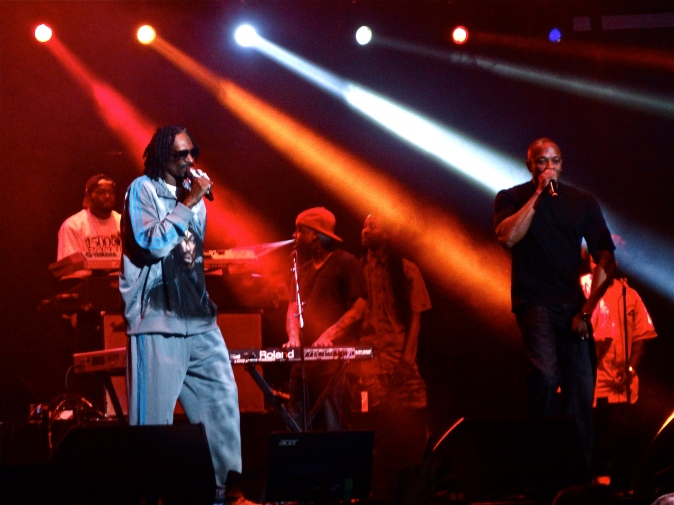 Snoop. He closed the night, and closed the night right. There’s not much I can say about Snoop’s sets.  I mean, when you open up with Dr. Dre and perform “Nuthin’ but a ‘G’ Thang” and “Next Episode”, you can seriously turn the lights up and leave, but Snoop knows how to keep a party going, and he brought onto the stage guest artist after guest artist while going through the most popular songs from his hip-hop hall of fame repertoire. 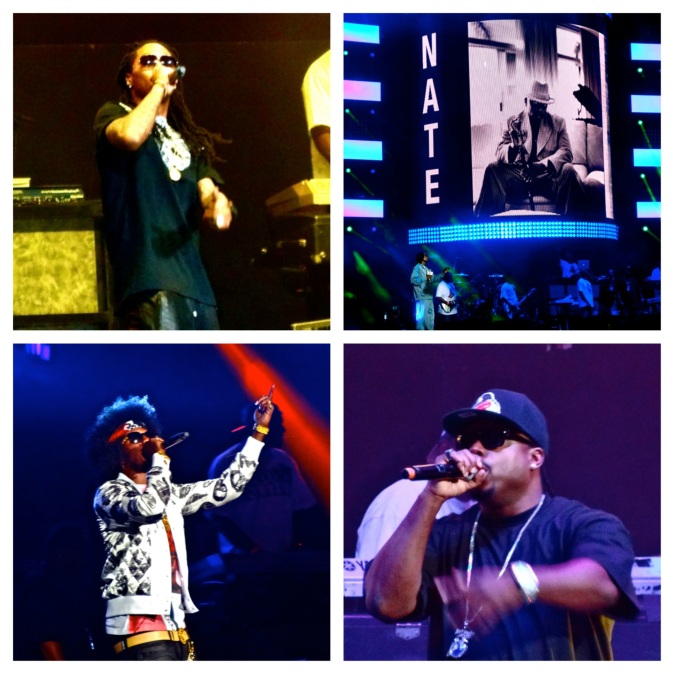 He performed “Same Damn Time” with Future. He brought up Ace Hood for “Bugatti”. DPGC staples Daz Dillinger and Kurupt were on stage for “Ain’t No Fun” and “Who Ride Wit Us”.  Trinidad James and  Problem also performed their own current hits. Snoop invited Wiz Khalifa up to the stage to perform Wiz’s newest single, and also slipped in a mention of “High School 2”. 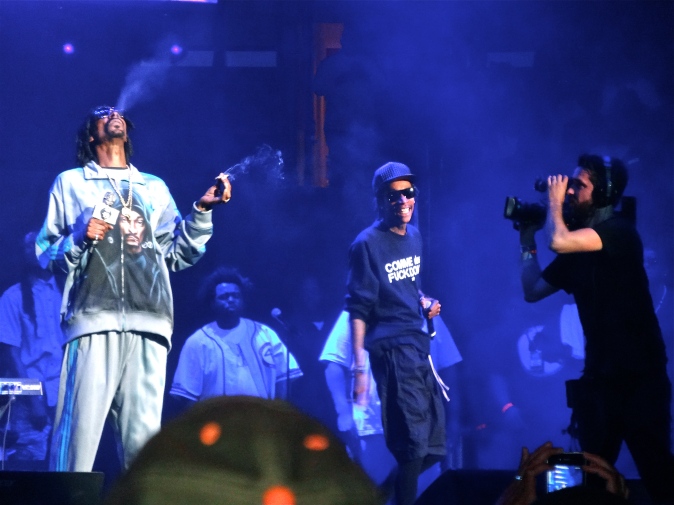 It was the perfect way to close the evening. Snoop is one of the few hip-hop artists who can bring that much star power for an hour and a half set. It was probably more that most of the crowd expected, and Snoop made sure every damn of them got their money’s worth. Chuuuch.