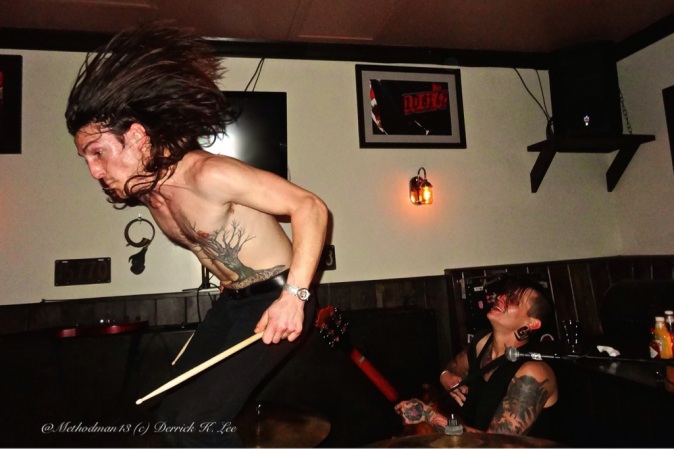 The first time I saw Hopeless Jack & The Handsome Devil perform, it was at the Ink-N-Iron Festival in 2013, and I only caught the last few songs of their set. A two man band that plays hard hitting blues/roots rock; heavier hitting than the Black Keys, and more aggressive than Jack White. They are a band based out of Portland, so ever since I saw them for those 15 minutes live, I’ve been keeping tabs on their tour schedule to see when they would be playing in Los Angeles again.

I noticed on their Facebook fan page that they were playing gigs down the Pacific coast, but to my dismay, there was no scheduled gig for Los Angeles. Having had their album “Hopeless Love, Shallow Hearts” on repeat since I saw them that first time, I messaged them to as why they weren’t playing in L.A. They got back to me quick, letting me know that a show they had scheduled had been cancelled at the last minute, and that they were bummed they weren’t playing in Los Angeles. In passing, they also added that if I could find a place for them to play on the following Tuesday (which was in less than five days), that they would make the stop in Los Angeles to play. Maybe they were just throwing it out there for the hell of it, but bands should never underestimate the lengths their fans will go to make sh*t happen.

I logged off Facebook, and picked up my cell phone. The rolodex in my brain started going through the people I knew, and I started punching digits. After a few calls, I had a spot lined up. It was a make-shift venue … in fact it it would be the first time a band would ever be playing there … but a gig is a gig, and the wheels to make it happen went in motion.

When the band got to Los Angeles, they met up with my buddy Rob (hopefully, I’ll get a chance to tell some of his stories on this blog, because his life is total rock and roll) who offered to help out and work sound for the band. Even though the event was set up last minute, a decent sized crowd showed up to watch this hard-rocking duo from Portland do their thing. It was loud. It was raw. It was awesome.

That night, I not only got to appreciate some kick-ass music, but I also felt a sense of accomplishment. It was the first time I ever really “hooked up” a band with a gig, and – if we’re speaking frankly here- it felt good. It reinforced to me the notion that what indie band’s need most are fans that are willing to get the music out there. It’s gotta be something more than just posting a song on Facebook or sending out a Tweet (unless you have an obscene amount of friends and followers on Facebook or Twitter). If you’re a fan of an indie band’s music, and you are always wondering why they haven’t caught on with others, maybe you can help them out by being more proactive.

Setting up the gig was only part of the work. I also called and texted a bunch of people, and a handful of them made it out; letting me know afterwards that they were really impressed, bought merch, and even told me that they would let their friends know about the band. A fan here, a fan there … at the end of the day, even though it was a small gig, a fan is a fan. For me, that was perhaps the most gratifying part of the evening for me.

Hopeless Jack and the Handsome Devil are back in Los Angeles area for this years Ink-N-Iron Festival at the Queen Mary performing on the 6th and the 7th. The photos below aren’t very good, and I hope to have better pics (using a new camera) when I see them later this year.  I’ve included their latest video in this post because it was loud at the gig and the sound in my video is a bit muffled. If you watch my concert snippets, a word of warning …. It’s LOUD. Lower your volume accordingly.