I’m not going to lie. The first time I saw Girl Talk, years ago at The Palladium, I wasn’t too impressed. Don’t get me wrong, I still loved all of his music (I have most of his albums on wax), but that show felt more like a high school prom with a great DJ than anything. A few years later, at Coachella 2012, I nearly lost my shit when I saw him perform.  Maybe it was the venue. Maybe it was the stage production. I don’t know …. but watching him do his thing at Coachella 2012 really left a favorable impression on me.
This year, he took the Main Stage, and again, like it was in 2012, I couldn’t help myself and I practically spent my whole time in the photo pit dancing like a fool with my big ass camera propped on my shoulder. I think I may have gotten the stink eye from a couple of the photographers who were in there with me. Meh. At least I had a good time!
Though I wasn’t in the pit when Girl Talk pulled out the “big guns”, he surprised everybody when he had E40, Too Short, Juicy J and Busta Rhymes come on stage to spit a verse or two over his insane mixes. If only I had been in the pit when that happened, I’d have tons of killer shots to share! 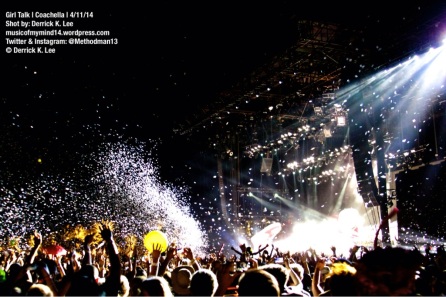