Nicholas Jame Murphy is Chet Faker, and chicks dig him. After hearing a couple of cuts from his latest album “Built on Glass” on NPR- God bless public radio- I scoured the internet to listen to more of his work. I was instantly hooked. To me, his take on electronic music reminded me of James Blake with a more soulful edge. When I heard he was wrapping his U.S. tour with a performance at The Roxy, I jumped at purchasing tickets as soon as they went on sale. Tickets for the show went so fast that The Roxy added scheduled another concert earlier in the week to accommodate the high demand.

Chet Faker is a producer, and his performance was, for the most part, just him, his console and his keyboard. For a couple of songs throughout his set, he brought on additional musicians (a guitarist and drummer) to fill out the sound, but in the dimly lit venue, it was essentially just him and the audience. Some reviews suggest that his performance was perhaps not best suited for a live setting, but I think that sentiment needs a qualifier.

Perhaps if he was performing at the Hollywood Bowl, or a venue whose capacity exceeds 1000, the performance could have used a full band or better stage design (i.e. lighting and effects), but we’re taking about the Roxy Theatre here (an intimate venue whose capacity is only 500), and in my opinion, the intimate setting, coupled with the intimate music, with the artist performing alone to the audience, was completely appropriate, and really the only way Chet should have be introduced to his legion of new fans for the first time. In fact, I thought his cover of Jeff Buckley’s “I Want Someone Badly” (the highlight of the show for me, considering that Jeff Buckley is a major favorite of mine) could have only performed by himself.

Speaking of fans, they were a mix of crazed young females who occasionally screamed, “I want to lick your beard,” to drunk frat boys who were trying to flirt with the girls who were fixated on main act. I could have done with the loud drunk frat boys (ok, maybe not frat boys … but definitely college aged kiddies who had no concept of how to handle their booze)  as I actually had a 5 second stare down to get one of them to shut the hell up during one of the songs, but the show was everything good that I anticipated.

Chet Faker is scheduled to perform at the sold-out FYF Fest in Los Angeles, August 23rd, and I am able to find- god, willing- a tickets, I’ll be anxious to see how his set then compares to what I saw at The Roxy.

Edit this setlist | More Chet Faker setlists
The photos below were taken with a DSLR camera. As per usual at The Roxy, I found it difficult to get the shots I wanted with the equipment that I have. I’ll master my gear eventually … hopefully … lol. 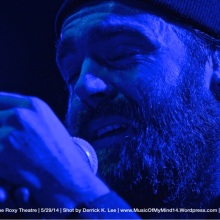 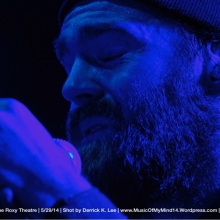 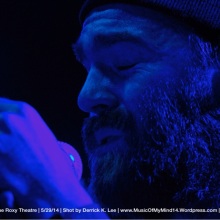 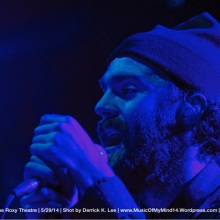 I could only find one video of Chet Faker’s performance at the Roxy, so I included some other videos of his live performance for your viewing pleasure. If you know of another video clip of Chet Faker performing at The Roxy, please let me know in the comments so I can add it to the post.