I don’t often “win” prizes, but when I do, I love it when those prizes are music related. I’m not sure when I registered for it, but apparently I had registered to win tickets for a Mercedes-Benz sponsored concert event featuring Young the Giant and Alabama Shakes. I guess it goes without saying … I won tickets.

The concert was held in Santa Monica Airport’s Barker Hangar, and free food and drinks were available. As an added treat, renowned street artist Mr. Brainwash “live-painted” a Mercedes-Benz. I’m wondering what Mercedes will be doing with that car. Would you drive it?

THOUGHTS: Young the Giant hails from southern California (Orange County), and their fans were out in force, leaned up against the photo pit barricade. From the first song, their fans were singing along, word for word.

Frankly speaking, I am not too familiar with the band. I knew that they had just released their sophomore album this year, and had been touring with the Kings of Leon, but if you had asked me to name my favorite Young the Giant song, I would have drawn a blank.

I could totally understand why there were touring with the Kings of Leon. Their music is big and rocking … anthemic … and was performed with a level of confidence only emboldened by their loyal fans.

I enjoyed their performance, but I’m still not sure whether their music is something that I could really fall in love with. Speaking with my guest, she stated that the show, “[f]eels like one really long song”. A good song … but a song that really didn’t have any truly memorable moments.

Maybe I still need to get more familiar with the band and their music. Maybe I should reserve my judgement until I’ve actually purchased one of their albums and had a serious listen to their tunes. But, if you had asked me right after their set to hum or sing parts of any one of their songs that I particularly liked, I would have drawn a blank.

PHOTOS: I didn’t bother to ask for a photo pass for the event, so I went to the concert with my trusty point-and-shoot. 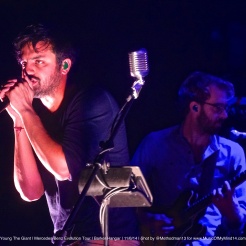 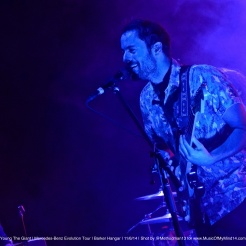