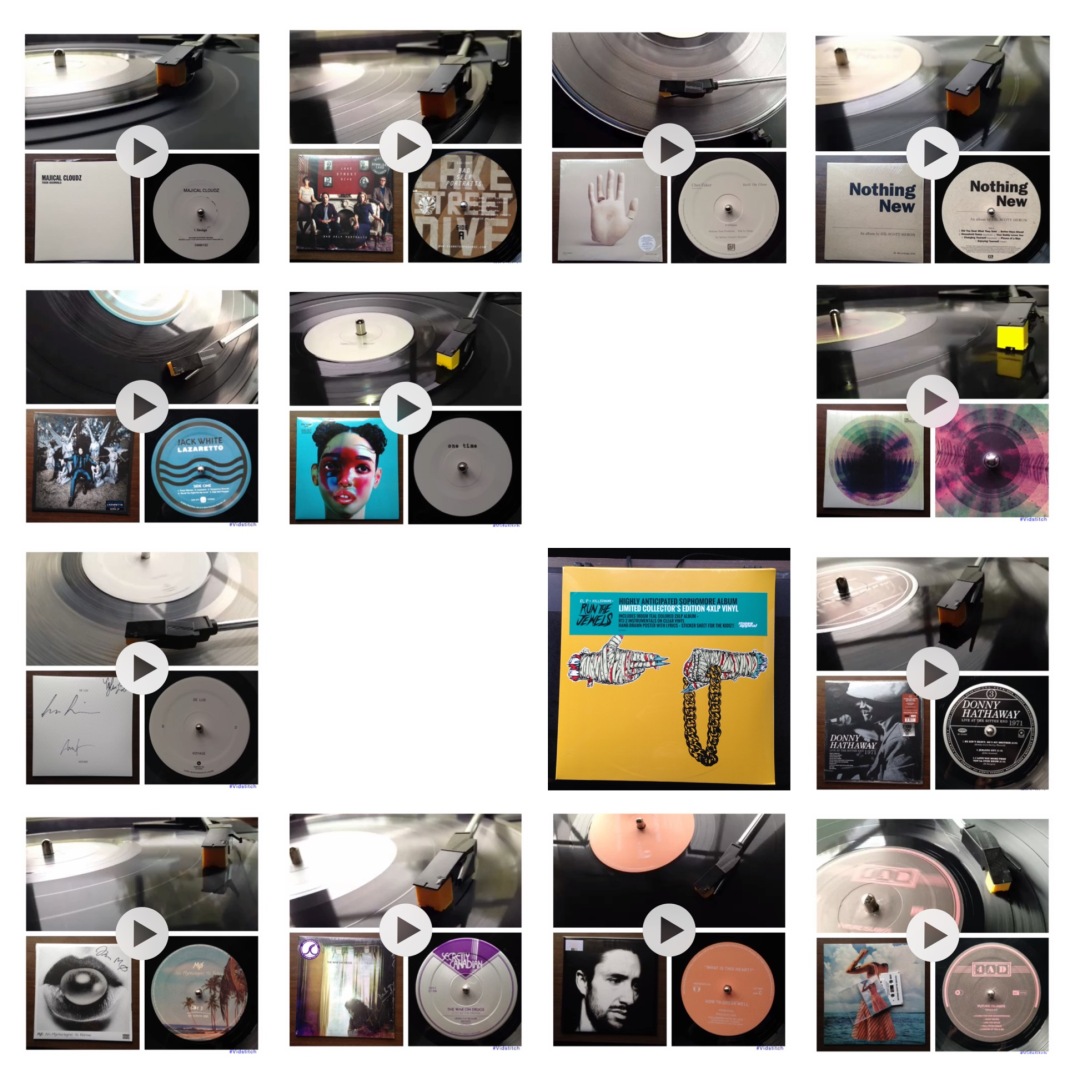 I purchased a lot of music in 2014. A ton of CDs, a couple of cassettes, and a few digital purchases. I’m also a lover of the vinyl format … but with the generally higher prices for vinyl, I’ve had to be a bit more selective with my decisions as to what new LP gets added to my racks. Some of the selections were good, some bad … but what I’ve got for you here are a handful of LPs that I purchased that I’m particularly fond of. Whether it’s their packaging or a immaculate track list, these are the vinyl records purchases I made in 2014 that I have absolutely no regrets about. In no particular order … drum roll please.

I purchased this album relatively late in the year, but I can’t stop listening to it. An extremely mellow album, this record has sung me to sleep after many a hard days work. Lush arrangements reveal the thick musical textures of each of the tunes on this album, and though the overall dark tone of the album may not be for everybody’s tastes, I simply can’t get enough of it.

I purchased the 180 gram vinyl version of this album. I would suggest that if you are planning on purchasing this disc, you do the same. The standard vinyl weight simply wouldn’t do the sonics of the album any justice.

I thought I had had my fill of female fronted, downtempo electronic music, but I was wrong. This album album, like the Chet Faker album I have on this list, basically set the bar for musical sexiness for 2014. FKA Twigs’ vulnerable voice, coupled with the strong instrumental production, form a lush panoply of sensual moods that have no equal in 2014.

I purchased the 180 gram, deluxe pressing of this LP as well. It includes four art prints, which are variations of the album cover. It also includes a bonus 7” of the track “One Time”, a snippet of which plays in the video/photo collage above.

“Live at the Bitter End 1971” by Donny Hathaway

A Record Store Day release, this album is a limited edition pressing of 4,000 copies, pressed on 180 gram vinyl. It is the first time the recordings of this show have made it to wax. Let’s put it this way … if you are a Donny Hathaway fan … or a fan of classic R&B royalty … you need to get this album in your collection STAT.

To think I almost didn’t see them perform at Coachella this year. Sam Herring and company left an impression on me with their live performance. Their album also kicks some serious ass as well. I love the album so much, I even went out of my way to purchase a cassette of it as well. Both the LP and cassettes has seen action in my house.

“What Is This Heart” by How To Dress Well

This album is heavy on emotions and may be a bit too introspective for those just looking for quick escape, but if you are looking for an album that can take you on a journey through love, loss, trust … you know, heavy stuff … this album is quite simply as beautiful a soundtrack as your could have. The production value is a surprising step up from prior albums, and it served Tom Krell (the lead singer) extremely well.

My copy is the deluxe double disc set limited to 1,000 copies. It includes a 25 page booklet and a separate 10” with the tracks “So Easy For Pleasure” and “Let U Know”.

“Lost In The Dream” by The War On Drugs

I’d like to think that I had this album on my “Best Of The Year” list before all of the other publications did. I picked this album up on a fluke. Captivated by the name of the band, and the fact that it was a “limited edition” colored vinyl (purple), I purchased this album on a whim. When I played it the album, I was giddy like a school girl with the thought that I had “discovered” something special. Well … It seems like everyone “discovered” this album this year, and I’m glad they did. It’s definitely worth the listen. Oh yeah … and that is Adam Granduciel’s autograph. Snagged it when I covered their concert at The Fonda Theatre.

I purchased this album after I caught her concert at The Echoplex for Culture Collide. I wasn’t anticipating that this would be one of my favorite LP purchases of the year … after all, I’m not the greatest proponent of power pop. But holy cow … Side D? I’ve can listen to that Side before I go to sleep every night. On the LP, Side D has bare boned, some acapella, arrangements of the more up-tempo tracks on the album. The titles are appropriately titled “(Night Version)” and I’ve listed to this side on many many nights. Beautifully simple. Simply beautiful. And yeah … I got her to autograph this album after her show.

KCRW introduced me to this band’s music, and I’ve seen them a total of 3 times this year. I’m a big fan of this band’s post-punk, alt-disco vibe. I’m keeping my fingers crossed that their sophomore album will yield more danceable gems, but for now, all I can say is that they absolutely killed it with their debut. Yeah … I like getting autographs. So what?

Sure … this album, like The War On Drugs album, is on almost everybody’s best of the year lists, and not wanting to buck the trend, there’s no way I can leave this one off my list either. Now … I’m not going to say that “Lazaretto” is Jack White’s best album (I mean, “Blunderbuss” was pretty fucking good), but it’s up there. But being a lover of all things vinyl, what Jack White, and Third Man Records, did with the album … the physical album … seriously changed the vinyl game, and the perception of what vinyl could offer. Hidden tracks under the center label? Locked grooves? A hologram etched in the dead wax? I mean … c’mon. My mind? Totally blown.

“Nothing New” by Gil Scott-Heron

Another Record Store Day release, this was an album that got in line early for. It paid off, as a by the time I got to the front of the line, there was only one copy left, and a girl a half a dozen people behind me wanted it as well. This album contains stripped down versions of his older songs, and it could be any more sublime. My favorite track “Your Daddy Loves You”. Can’t get enough of it.

I saw Lake Street Dive for the first time at First City Festival this year, and they really impressed me. The musicians in the band all went to the New England Conservatory of Music in Boston and I you could tell that they earned their musical chops from some whether. Their jazz infused pop and soul music is terrifically easy listening for the discerning musical ear.

“Built On Glass” by Chet Faker

I’ve said it before, girls love him, and guys want to play music like him. This album, like the FKA Twigs album posted above, it the male LP of sexy tunes. You can easily let the needle drop and with or without a physical distraction, you could let a side play uninterrupted, no problem.

I wasn’t anticipating putting a 7” on my list of proud vinyl gets this year, but I couldn’t leave this one off the list. Though the disc only has two new songs (“Savage” and “Love Soul”), disc comes with a 28 page booklet that reprints one of the member’s tour journals from their touring activity from August/September 2013. Though I missed out on their shows in LA during that time, I simply had to read to tour journals to feel what these gents were going through, giving me even more reason to make sure I catch them the next time they are in my neck of the woods. 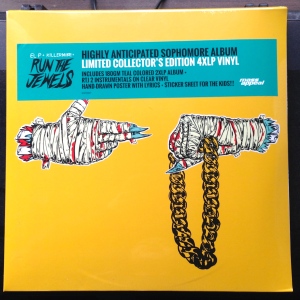 Ok … I’m cheating here … because I have this 4XLP, deluxe edition of their latest album, but I can’t bear to open it. It’s the curse of collecting vinyl (don’t worry, I paid for the download of the album). I’m so tempted to pull the wrapping off … but … AARRRGGGHHH. I’m so torn.

And those are the LPs I purchased in 2014 that I’m particularly satisfied with. Hopefully, you’ve been exposed to some new music. Hopefully, you agree with some of my selections. Hopefully, I’ll see you around next year.