I’ve got a full time job. It takes a lot for me to drive 45 minutes to catch a band play on a weekday. When I found out that The Janks and Rachel Goodrich and the Grrrls were playing on the same bill at the Bootleg HiFi on a Thursday night, the 90 minutes of driving and the subsequent lack of sleep for a 9am conference call is definitely worth it.

The gents from The Janks were kind enough to approve me to bring my camera to their gig, so I had a little something more to look forward to. I’d been to the Bootleg before, and I new that their bar stage is typically dimly lit with flashing LED lights. I knew it was going to be challenge because I don’t have the greatest gear, but since it was my first time taking photos at this venue, I had a little bit of an adrenaline rush. For me, photography is like the lottery. I take the photos and hope for the best, knocking on wood for a decent shot or two.

I got to the venue, and nature was calling. The large ice tea I sipped on during the 45 minute drive up apparently needed to find alternate residence. At the Bootleg, there are two bathrooms; a women’s room and a unisex room. Of course, when I tried to subtly jiggle the door to the unisex door, it was locked. Waiting patiently, my eyes kept glancing at the ajar women’s room door.

After waiting for about a minute, I tried to jiggle the unisex door again, hoping that I perhaps hadn’t pushed the door with enough force to actually open the door. Nope. It was locked.

Waiting a few moments longer, the door opened, and to my embarrassment, it was one of the artist’s that I had come to the venue to see: Ms. Rachel Goodrich. The blood rushed to my head, and I could feel my ears getting warm. I fumbled through an apology as she smiled and said that she was changing for her performance. As she packed her bag then exited, I meekly mentioned that I was looking forward to her performance. I couldn’t have been more awkward.

I absolutely love Rachel’s music. A bit of rock-a-billy with bit of surf rock, she played all of the songs that got me interested in her in the first place. It was a short set, but it was enough to not only keep me longing for more, but also garner her more fans (my friend mentioned to me that she “fell in love” with her music and needed to have one of her songs as a ring tone).

After her set, I saw her standing with some of her band mates and we exchanged knowing smiles as I told her how much I enjoyed her set.

The next act was artist that I hadn’t heard of before: Korey Dane. He seemed like a soft spoken gent as his music was earnest and subdued. Rooted in Americana, Korey’s music had shades of folk and country.

His set opened with a band mate on stage, solo, playing a mellow guitar solo. Korey made his way on stage during the instrumental introduction to segue into his first song which was a downtempo number. The crowd seemed unaware that his set had started as it took a moment for the chit chat to die down, but soon enough the crowd fell into the groove. 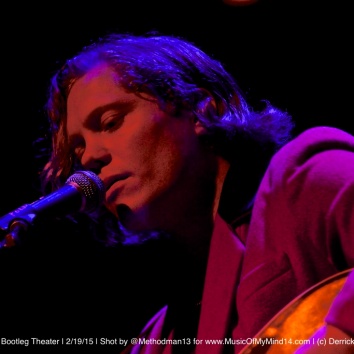 The Janks were next. The Janks rock.

The guys have been recording new music and have scheduled release dates for a handful of new singles (the first single this year, “Edge of Love” was released on 1/30/15, the second single “Millionaire” was debuted at this gig and will be released on 2/27/15, and a third single which will be debuted at the Hotel Cafe on March 21st). You can listen to “Edge of Love” below.

But one of the best things about last night was seeing some handsome @Themowglis in the room supporting @thejanks. pic.twitter.com/fOW19NWDX3

The brothers Zmed (Zach and Dylan), with bassist Nate Light and drummer Leon LeDoux showcase their sounds with terrific stage presence. Watching Dlyan shred on his stringed instruments while on his knees as if paying homage to the rock-gods makes me wish I learned how to play the guitar.

Yes. The Janks rock. You need to head over to the Hotel Cafe in March. You won’t be disappointed. 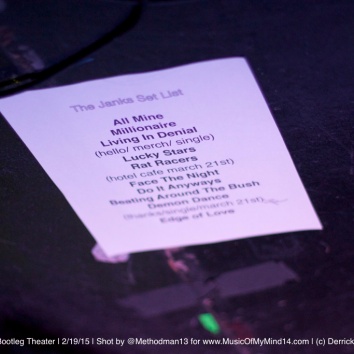 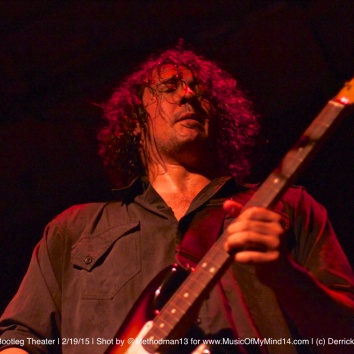