I arrived at the venue relatively early. Knowing that it was a sold out show, waiting in line would be the only way I could get up front with my camera to take pictures. After all, the lighting in The Troubadour makes it a tough venue to shoot in. Unfortunately, for me, there were about a hundred other people already in line by the time I got in line.

There isn’t much I can say about how dope Terrace’s set was. After all, I’ve already seen him perform twice this year (once at the Virgil in January and again at the Del Monte Speakeasy in February), and I’ve already preached how seriously amazing his live shows have been, so I won’t get into here. His music, and his musicality in interpreting jazz classics, is what modern jazz should aspire to be. As far as I’m concerned, he’s an ambassador of the West-Coast Jazz movement that I’ve noticed gained traction recently.

Though I usually never convert my photos to black and white, I had to in this instance. The lighting was so low in the venue, the only way I could get some of the images I liked to really pop was to convert them. Though I’m much more partial to having the photos presented in their natural light, without some really high end (and expensive!) photo gear, this was the best I could do. I took pretty decent pics of Cody Chesnutt’s performance at the Troubadour, but I was up in the front for that gig. I guess, with the gear that I’ve got, I’ll have to get up closer to the stage for good pics. You live and you learn. 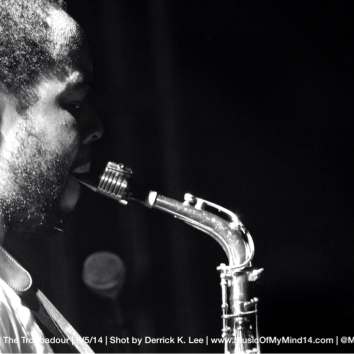 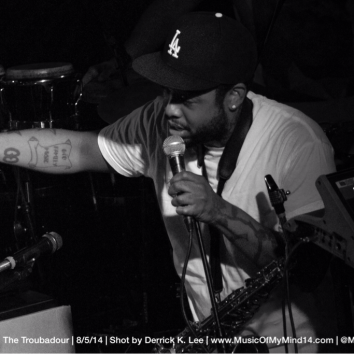 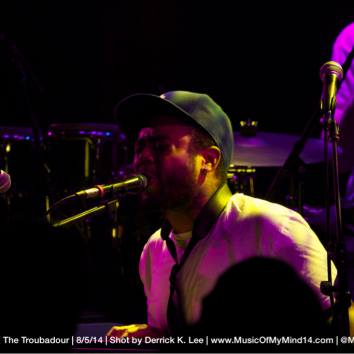 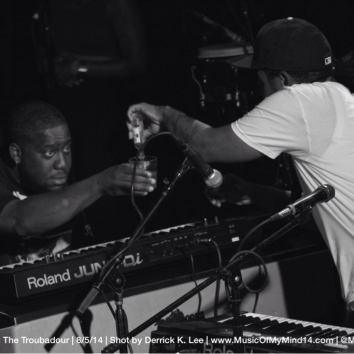 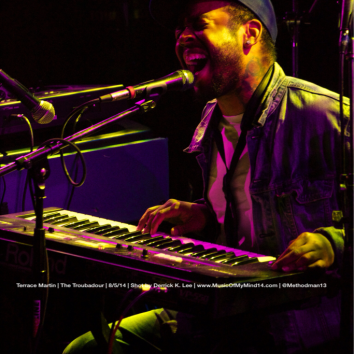 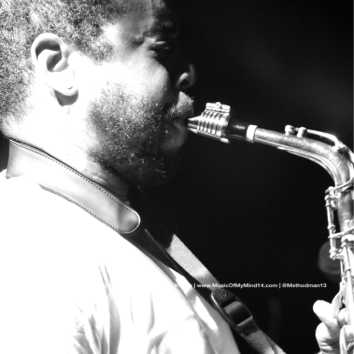 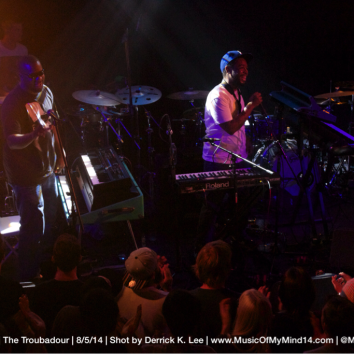 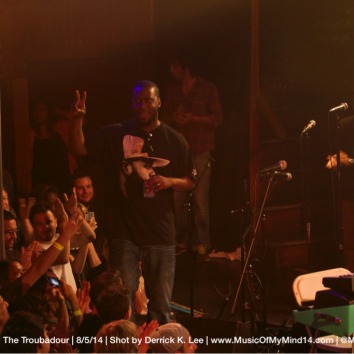 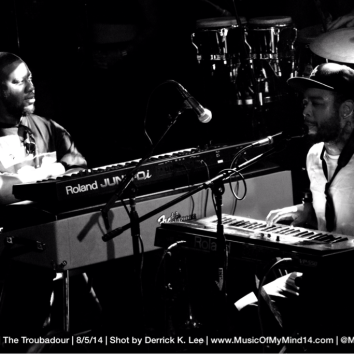 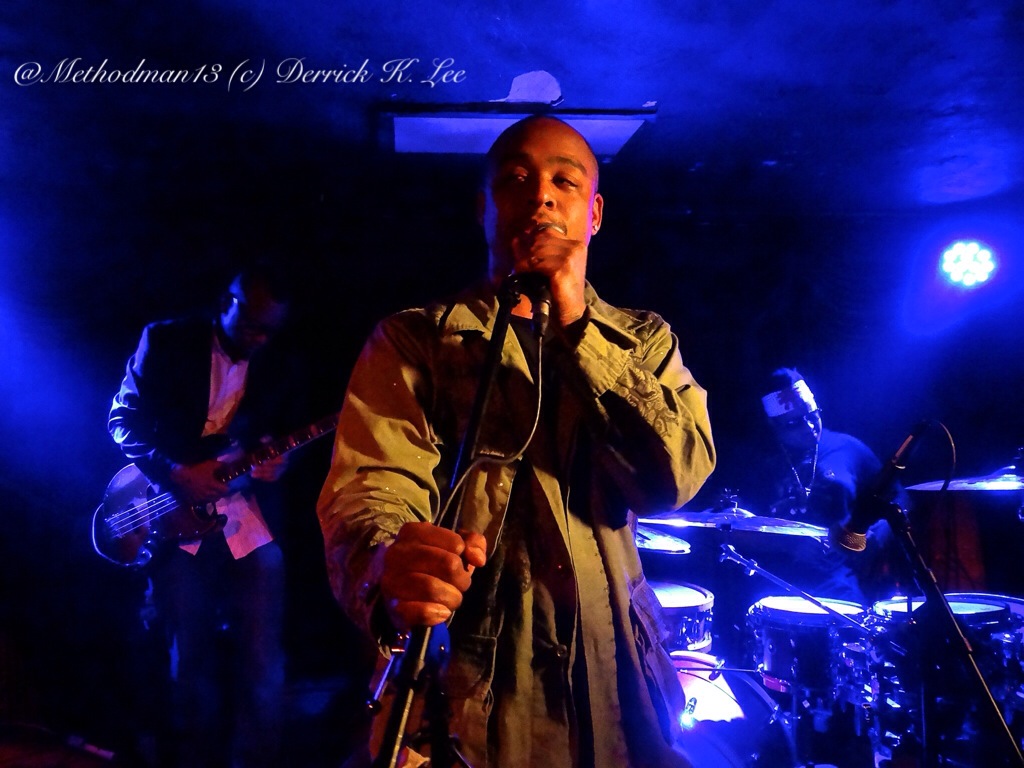 Earlier this month, I read a great article on LA Weekly’s website about the resurgence of jazz music in Los Angeles. It was a terrific article that opened my eyes to new venues and music to keep an eye on in the Los Angeles area (I’m definitely going to check out The Piano Bar when the West Coast Get Down are playing and pick up a copy of Kamasi Washington’s “The Epic” once it’s released). But even without reading the article, I’d already been trying to learn more about the Los Angeles Jazz scene, and my conduit had been Terrace Martin.

In honor of Black History Month, Terrace decided to gather a few friends to join him at the Del Monte Speakeasy to celebrate the music of some of the great, black musicians/composers. The musicians who turned up to share the stage with Terrace were, to put it simply, legend … wait for it … ary.

Ethan “Ebassman” Farmer, Ronald Bruner, Marlon Williams and Robert Glasper formed the “house band” and throughout the night others jumped on stage to jam. Malcolm-Jamal Warner, who is a very talented spoken word artist, and Myka 9, a member of Freestyle Fellowship (whose album “Innercity Griots” is still, in my humble opinion, one of the greatest, and the first, jazz infused hip-hop albums ever produced) free-styled a song. Kamasi Washington, who Terrace acknowledged was one of the main reasons why Jazz was alive in Los Angeles, joined for a song. Grammy nominated jazz saxophonist, Ben Wendel, and the incomparable, modern day drumming legend Chris Dave stepped onto the stage to play.

I’m not going to wax poetic about the musicality of each of the players, and the amazing music that I witnessed that evening (you can see and hear it in the video highlights below), but I will say the experience that night was something special.

Being up at the front of the stage for the gig, I could overhear the playful banter and ribbing among the players that made the performance that much more engaging. Ron and Robert kept going at each other about their Grammy wins, with Ron jokingly telling Robert that he was going to make him sound better. After Marlon played a quick lick of a theme from “What You Won’t Do For Love”, Terrace and Robert goaded him, albeit reluctantly, into the spotlight for a solo moment to demonstrate his playing chops. While praising his sound man, Terrace honestly told the audience the band hadn’t sound checked earlier in the evening because they were eating, drinking and watching the NBA all-star game. Ron Bruner stepped up to the mic to freestyle sing, after which he told Robert, “See, I told you I’d make you sound better.”. The lighthearted atmosphere of the session kept the evening fresh. When other musicians took over the reigns on certain instruments, or took breaks, they stepped into the crowd with a drink to watch the magic that was happening on stage as well.

With extraordinarily skilled musicians taking turns to play on themes throughout the evening, I imagined that the atmosphere that night was something like the New York jazz scene  during World War II where and when legends like Ben Webster, Lester Young, Thelonious Monk, Charlie Parker, and Dizzy Gillespie outdid each other on a nightly basis. In the packed and humid venue, with music swirling and dancing in my ears, I lost myself to the genius that was present and playing in the room. A terrific evening of music with an incredible, and practically unbelievable, roster of talent. Something that I wish happened more often. Especially in Los Angeles.