I was a fan of Aloe Blacc before he was … Aloe Blacc. Being a fan of the underground, L.A., hip-hop scene back in the mid 90s, I was listening to Aloe Blacc’s music before he broke-out, commerically, with “I Need A Dollar” in 2010.

I saw Aloe Blacc first perform at The Beach Ball Festival: Soul Revue September of 2013. As much as I liked his hip-hop leaning music from back in the day, I absolutely love his soulful leaning music that he’s focusing on today, so not hearing his jams like “Blind World” or “Close To Me” was something I could easily accept … although, I wouldn’t mind him sprinkling in a song or two in future sets.

Dressed in a classy fitted suit, topped with a sharp fedora, he took the sun drenched stage and dazzled the audience with his bright personality and hit singles.  From “I Need A Dollar” to “Wake Me Up” to “The Man”, the audience was treated to songs that have been permeating the radio airwaves for the past several years. He even performed a slowed-down cover of Michael Jackson’s “Billie Jean” that really had the audience eating out of his hands.

I wasn’t able to find a set lit of the of the songs that Aloe Blacc performed at UCLA’s Jazz Reggae Fest, so if you happen to know which songs were performed, please leave them in the comments below and I will add them to this post. 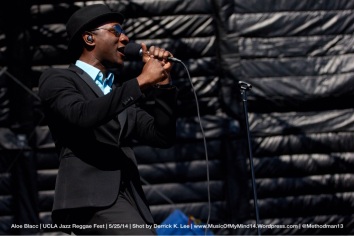 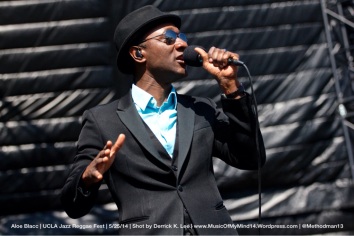 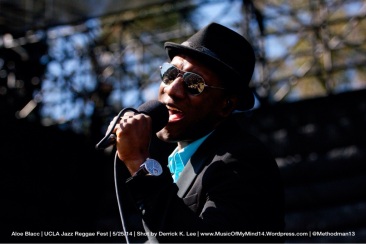