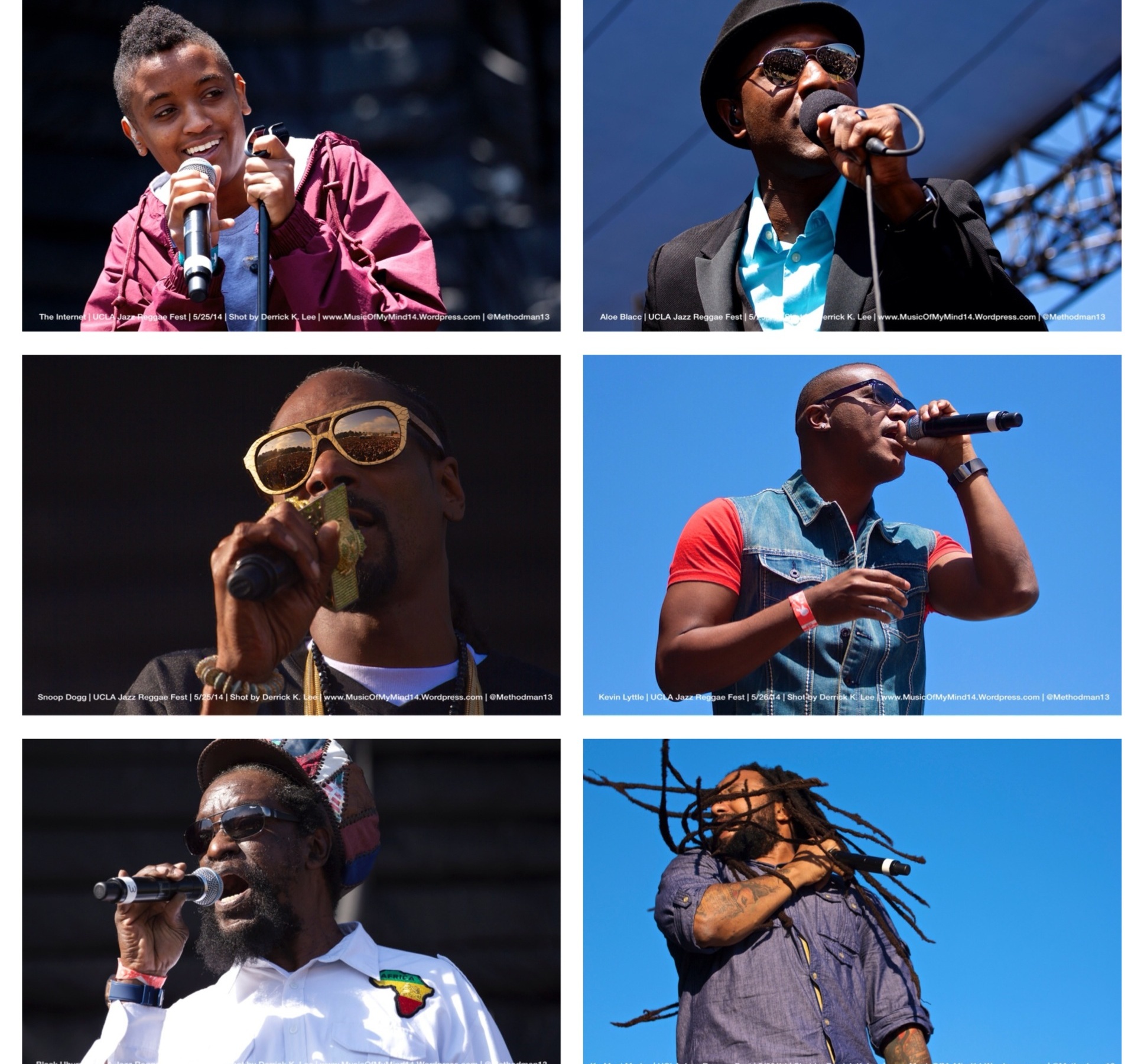 Every Memorial Day weekend for the past 28 years, UCLA has hosted a music festival called the JazzReggae Festival. Originally, the first day was devoted to Jazz and the second day was devoted Reggae. Though the first day has morphed to a “Jam” day, the festival has always been able to pull in outstanding talent for the price of admission. If you are ever … Read More The 28th Annual JazzReggae Festival | UCLA | May 25th & 26th [PHOTOS]

Working for Snoop, I’ve gone to my fare share of his concerts. One would think that after going to more shows than I can count on my fingers and toes, I’d be bored or indifferent to watching him perform. This is far from the truth. Snoop’s passion for his art always impresses me. His live show, which features a live band, is always entertaining … Read More Snoop Dogg | UCLA Jazz Reggae Fest | 5/25/14

I was a fan of Aloe Blacc before he was … Aloe Blacc. Being a fan of the underground, L.A., hip-hop scene back in the mid 90s, I was listening to Aloe Blacc’s music before he broke-out, commerically, with “I Need A Dollar” in 2010. I saw Aloe Blacc first perform at The Beach Ball Festival: Soul Revue September of 2013. As much as I liked … Read More Aloe Blacc | UCLA Jazz Reggae Fest | 5/25/14

I saw a lot of bands at Coachella this year (2014), but there was one band that was on my list, that I regret missing: The Internet. The Internet is a neo-soul band consisting of Odd Future members Syd the Kyd and Matt Martians as well as Tay Walker, Patrick Paige and Christopher A. Smith. They debuted in 2011, and released their debut album, “Purple Naked Ladies” … Read More The Internet | UCLA Jazz Reggae Fest | 5/25/14

Charles Bradley is living proof that the American Dream is still alive.  After learning about his life from the documentary “Soul of America”, I made an effort to catch his afternoon set at FYF Fest in 2013. His performance was a highlight of that day. When I heard that he was to perform at the Fonda Theatre, I knew that it was a show that I … Read More Charles Bradley | The Fonda Theatre | 5/17/14 [PHOTOS]

I don’t know what they are feeding their kids across the pond, but I would suggest that we bring whatever they have over there and start feeding it to our kids in the States. It was a last minute decision, but having missed out on seeing Jake Bugg perform at The Wiltern, I decided that I wouldn’t miss out on catching The Strypes, a four piece blues/garage rock … Read More The Strypes | El Rey Theatre | 3/31/14

The first time I saw Tom Krell p/k/a “How To Dress Well” perform live, I thought to myself, “I really need to see him perform in an intimate club venue.” On March 18th, at The Roxy Theatre, I got my chance. What intially hooked me to How To Dress Well’s music was twofold. First, the music leaned dark, simple and atmospheric; the kind of music … Read More How To Dress Well | The Roxy | 3/18/14

The last, and first, time I got to hang out with the fellas from The Weeks, I got drunk, rocked my face off and got late night taco-truck tacos with some of them after the gig. This time, I decided to take a more professional approach. I had asked for permission to take some pictures during their sound check and show using a DSLR camera … Read More The Weeks | The Satellite | 2/21/14

A band is, literally, a living breathing entity. Nowadays, rare is a band that sticks with each other for the long haul. Guns N Roses, Oasis, The Police, Smashing Pumpkins, the list goes on. A band keep on performing with eh same the name, but when the faces change, it often times makes it difficult to maintain the same level affection that curried the … Read More The Secret State | Loaded Hollywood | 10/13/13

The National has been around for a while, since the late 90s, releasing the first full length album in 2001, but I really didn’t start listening to them until their album “Boxer” (which is still my favorite The National album), which was released in 2007. Since then, I’ve been high on their music and their melodramatic, punk, indie rock sound. They released “Trouble Will Find Me” in 2013, … Read More The National | Jimmy Kimmel Live | August 12, 2013

What is it with me and female fronted bands these day? It seems that I just can’t seem to get enough of them. On July 17th, 2013, I went to the Hollywood Palladium to check out the Athens, Alabama-based quartet Alabama Shakes. I can’t pinpoint the time I first heard their music, but I remember that the song I first heard was “Hold On”. It was a … Read More Alabama Shakes | Hollywood Palladium | July 17th, 2013

Most of the time, my lust to see a band perform live is satiated once it happens.  After all, the costs of concert going these days can get quite expensive, and I typically like to use my hard earned cash experiencing something new, rather than retread the same territory. There are a handful of acts that I’ve seen perform live, however, that I would … Read More Rodrigo y Gabriela | Hollywood Bowl | July 14, 2013