There’s aren’t many bands that’d I’d see four times in one year. Hopeless Jack & the Handsome Devil is the only one that I’ll have on my list this year.

Not only are they really cool dudes, but their music also rocks. This year, I saw them twice at Ink-N-Iron and personally arranged for them to play a gig at the Garage. When they told me they had a weekday gig in downtown L.A., I didn’t hesitate to put it in my calendar.

I get pumped to see these guys live, because they have an absurd amount of stage presence. From Jack growling into the microphone, wildly dancing while jamming killer riffs, to Pete’s eye’s menacing, almost possessed, look while he smashes the drums, these guys, at least to me, embody rock and roll. As a wanna-be photographer, getting chances to shoot bands like this is a thrill. If I can capture a moment of the pure, unrelenting joy that these guys perform with … that’s something that would make my day.

I got to the venue a little early, and the fellas were our front hanging in their tour van. Jack was greeting friends and Pete was munching on a slice of pie from California Pizza Kitchen. I told Pete that I liked some of their pizzas, and he told me that he never realized that California Pizza Kitchen was an actual restaurant. He always assumed that it was just a frozen pizza. I got a chuckle out of that. 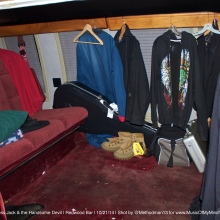 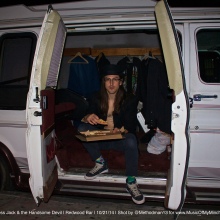 Set times were running a little late, and friends, fans and the band were getting antsy. Jack, while puffing on a cigarette, was already making plans for after the set.

“Tacos, man,” Jack said while flicking out his smoke, “I need tacos.” Taking recommendations from friends, he already had location in mind. In a Pavlovian kind-a-way, I started craving tacos too.

Got to meet some of Jack and Pete’s friends, including a photographer named Jason who was touring with the band as a friends and roadie. This was one of the dope pics he took at the gig.

The light was dim and I had put pump the ISO on my camera (even though I know that the pics always come out noisy at a high ISO with my old-ass camera), but I still think I got a couple decent shots. 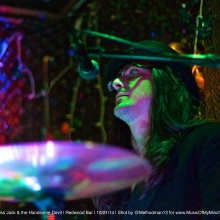 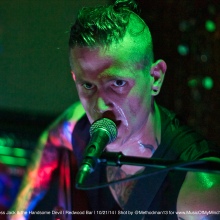 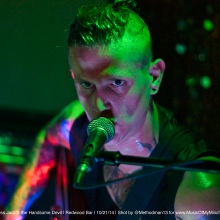 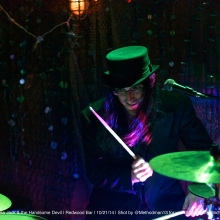 Again, they rocked (check out the video clips below).

After they had packed, the band, and some of the fans, made a short trip to the late-night taco stand. While waiting to order L.A. deliciousness, we noted a multi-storied, retro-fitted building across the street that was for lease. We started talking about what we would do if we could afford to buy the classic looking building. As we sipped on horchata, and devoured out grub, we fantasized about which floor would be rooms and which floor would be the studio … but I think we were all in agreement about having the ground floor be a performance venue/club.

Dreams and tacos. A perfect end to a terrific night of rock-and roll. 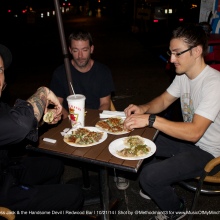 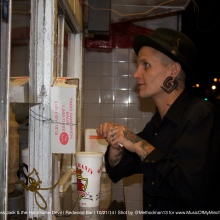 Do yourself and follow them on Facebook. You’ll want to catch their live show if they end up in your neck of the woods.