Kyle Field is Little Wings. He’s been called a “musician’s musician” and his music has influenced a lot of popular artists (i.e. Feist’s named her film, Look At What The Light Did Now, after a Little Wings song).

A last minute add to the lineup by Red Bull, Little Wing’s music reminded me of the California rock sound made popular by the Eagles; dreamy and balladic, without the polished harmonies. Kyle’s voice is gruff yet tender and evoked strong sentiments of yearning and remembrance. Personally, I thought that the music was better suited for an outdoor venue on a lazy summer’s day rather than a converted hotel showroom, and I could tell that some of the audience became a bit restless with anticipation for Phosphorescent.

Let’s put it this way, if Little Wings played an afternoon set at Coachella, I’d be more than happy to lay down on the grass and soak in the tunes. 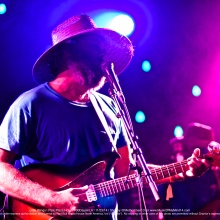 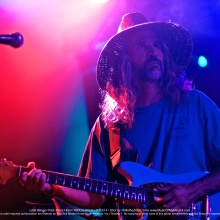