CLICK HERE to read our event review and to CHECK OUT links to the other acts that performed at AIR+STYLE!!!

THOUGHTS: This was the first time I got see and shoot The Flaming Lips in concert, and lemme just say that three songs in the pit just simply isn’t enough time … at least for me. Even with the rain steadily falling, I longed to stay in the pit for the entire set. Though the weather did delay the performance (water effected some of the digital instruments on stage), the tech issues were resolved after a few minutes and Wayne and company jumped into their set.  In a bit of irony, Wayne Coyne announced that he was bringing some sunshine to the day and brought forth a rainbow, sun and mushrooms to join him on stage. Even in the rain, Wayne’s performance was as giddy and lively as I’ve heard it too be. His presence was definitely grander than the weather, and all of the colors, and music, was beautifully overwhelming. It was a moment in time when the music/act actually, completely, distracted me from the fact that my t-shirt had soaked through, and that I was particularly cold. I’ve seen gorgeous photos of the band’s performance from fellow photographers, but it’s one thing to see it in print or Instragram and another to see it live and in person. I just hope I get another chance to shoot The Flaming Lips in the future. 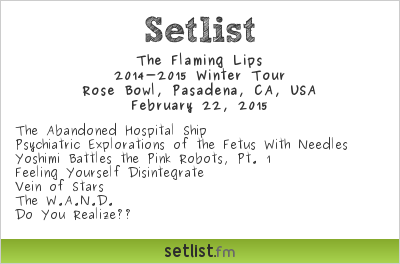 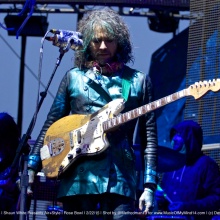