Pop, Indie Rock, EDM, Punk – one reason I liked this festival is that every band had unique musical stylings and combinations of sounds, and the US band Torches was no exception.  Torches is an Indie, Rock, Electronic blend and the second band of the night with a traditional string instrument, a violin.   This band had an Empire of the Sun vibe and sounded like Phoenix, if Phoenix went Indie Rock.   If you’re a Friendly Fires fan, you will like this band, but they can’t capture a stage like a Friendly Fires or a Phoenix.  Their performance was bland, but it was a church stage and the Festival itself was not well trafficked.   Azad Cheikosman, Eric Fabbro and Adrian Acosta make up this Los Angeles-based band and I would have liked to have seen their EP Release show at The Bootleg Theater to get better sense of what they can do, but I listened to their tracks again at home and Torches is tight!  I can see some mainstream pop, alternative and electronic sounds with defined rhythmic drums.  I thought they sounded like Arcade Fire, Cut Copy, The Mighty Lemon Drops and similar artists, which makes sense because according to their bio they have worked with David Newton (The Mighty Lemon Drops) and Jeff Lipton (Arcade Fire).  If you like any of the artists mentioned, or another band I love, The 1975, I would definitely check out Torche.   Torches dropped their EP, Endlessly Repeating, on June 19, 2014. 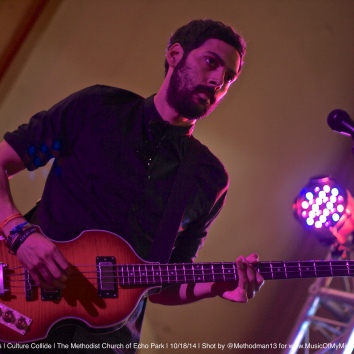