On 3/28/13, a buddy of mine shoots me a text at 11:22am about a show that he’s planning on going to in Hollywood on 3/29/13.  He tells me that a friend of his is managing a band based out of Nashville called The Weeks.  He described them as “Shit kickin Southern rock” and that the band had recently signed to the Kings of Leons of record label, Serpents and Snakes. My buddy knows I’m a fan of Kings of Leon, so he was basically telling something that would peak my curiosity.

I check out the band’s Facebook page and I am immediately impressed with what I hear.  Their latest release, “Gutter Gaunt Gangster” definitely has a Southern Rock feel to it, but it also definitely had catchy hooks and clean production value.  It’s only 8 tracks, (with one track only 50 seconds long), so it wasn’t long before I had streamed the album 4 or 5 times in a row. It’s a loud and fun album that feels like a party.

I do a little research online and read that the band hails from Mississippi, and they are, in fact, currently signed to the Kinds of Leon’s record label, but they definitely have a sound distinct from KOL.  They remind a little bit of We Were Promised Jetpacks but with a little more funk, and a little bit like Band of Horses but with more edge on the guitars.  Mind you, I based this on only the one album I was listening to.

The songwriting is solid.  Each member of the band may be in their early twenties, but you probably wouldn’t be able to tell it from the their songs on this album.  The album opens with “The House We Grew Up” which seems to be their statement to the world that they’re on a mission with this music thing. The rest of the album seems to follow the general theme, with the band singing about looking for something better and confronting those things that have tried to hold them back.

If you listen to the lyrics on this album, a lot lyrics seems to come from an intense place.  They use religious references freely, but it isn’t preachy.  Rather, it just adds to the intense emotions they are bringing to the music.Take for example the following lyrics in “Stigmata” which has an uplifting chord progression that seems to contrast with its heavy lyrical content:

“I met the man who raped my childhood/ Oh well, we were never young it’s true/ But when everyone around you keeps dying lord,/ What the hell are we supposed to do. […] I blame the devil, what else could it be/ I blame Jesus, he ain’t answering me/ Don’t call me depressed, don’t call me sad,/ I’m giving up on this life I had”

But I digress.  This isn’t supposed to be a review about the album though.  Just trust me that it’s really good.

I text my buddy back and let him know that I’m going to make the show.  It was a long work week, so I try to figure out a way to get to the venue without driving. I ended up getting a ride from a friend who was heading the same direction, where I spent a greater majority of the ride trying assure the person driving, who also was happening to have a bad week, that things will get better, and that they had to keep pushing through the hard times … kind of fitting, right?

It had been a long, long time since I had been to Three Clubs, and I was surprised that I totally forgot about the portrait of Billy Dee Williams with a Colt45 gracing the end of the bar in the performance area.  It was definitely a sign of good things to come. I met up with my friend, and after briefly meeting some of his friends, I made a b-line to the bar to grab some drinks: a shot of Jameson and a Dewars on the rocks.

Shelly Colvin, a singer songwriter, was opening for the band while I ordered my drinks. Her smooth, laid back vocals helped the shot of Jameson go down quite smooth. I sauntered back out to the patio to catch up with my friend.

As I went back in later to get another drink, Shelly was finishing up her set. I got another shot of Jameson and Dewars con rocks and made my way to the front of the stage.  As the band took to the stage, they took a minute to adjust the position some of their equipment. It was a really small stage.  Shelly sang back up vocals a few songs, and her mic had to be set up off-stage left, and the keys had to be pushed to the far back to make way for the drum kit. The stage may have teeny, but the band worked every square inch of it. 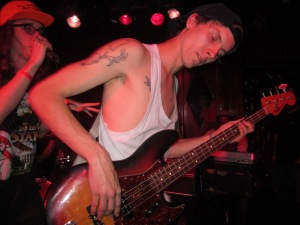 Damien Bone killing it on bass.

I had only heard the songs from their latest EP, but they seemed to have played their older (and maybe newer?) songs in their set as well. It really didn’t matter that I didn’t know all of the songs in their set though.  The band took that little, teeny weeny stage and made it their bitch.  Imploring the crowd to move closer to the stage, they fed off the crowd, and themselves, and really kept the set moving with their energy.

The energy in that club was electric and the rising temperature of the room vouches that statement. The music hit hard, fast and frenetic. The Southern rock roots, laced with funk and soul, made the it easy to dance to and the crowd in front of the stage was moving to the rhythms. The live show was groovier than I expected.

It seemed like the set flew by, and that was because everyone was having a good time.  By the end, my shirt was sticking to body, drenched in sweat.  I made a b-line to the merchandise table to pick up a vinyl copy of the album. I caught the band on the patio cooling down and took a few pictures of the players from the evening.  This one was my favorite… Probably because Shelly is a cutie. 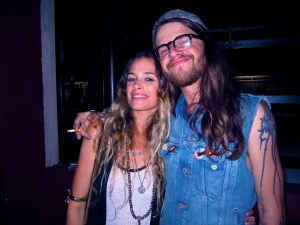 Shelly Colvin and Sam Williams relaxing after the gig.

I offered to buy a round of drinks and Damien and Shelly accepted.  I did a shot of Jameson with Damien and Shelly had glass of champagne.  She appreciated the gesture, and kindly gave me a copy of her latest CD: “Up The Hickory Down The Pines”. I say I got the better end of the deal.  Another of their fans was getting autographs on a T-Shirt, and after she was done, I borrowed the permanent marker to see if I could get all of their autographs on the LP I had just purchased.  In my boozy haze, I think I may have missed a few. LOL. But I did like the fact that one of the guys had “branded” the LP with an “LA 2013”. A rock and roll time-stamp, if you will. Click here if you’d like to see some more of my music treasure. 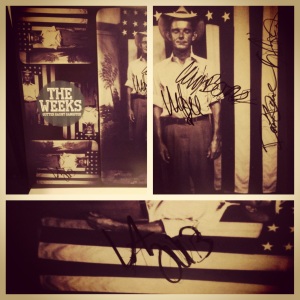 It turns out that some of the band members wanted to grab a bite to eat, and my buddy suggested a nearby taco truck that was supposed to have some of the best pastor soft tacos. Ended up getting tacos with Alex Collier (keys), Damien Bone (bass) and Sam Williams (guitar).  We grubbed it up, and afterwards, headed our separate ways.

The guys were continuing on their tour, and let me know they would be opening for Kings of Leon over the summer in Europe.  I wished them the best, and they told me to pick up their upcoming album when it gets released.  I assured them that I would.

Here are some video clips from the show that I took.