One of my favorite female rock vocalists is Nina Diaz. Usually the front woman for the punk rock band Girl In A Coma, she’s decided to take a little hiatus from the band to record some music solo. The results are a set of music that is wrought with emotional expressions of melody that act as confessional. Whether reflecting about her life changes or the relationships with with those in her inner circle, the music is something that really touches the soul, and her performance at Alex’s Bar again reaffirmed my serial devotion to her music.

Although she was fighting a sore throat, she battled through her ailments and gave the audience a set that not only showed off her powerful alto voice, but also delicately wooed us with its inherent tenderness. Though I didn’t attend her concert the following day, I heard that her voice gave out on her midway through her set. It’s a shame that that audience didn’t get to experience what I had the night before. I certainly hope that those who attended her Saturday gig will give her the benefit of the doubt because she is fully capable of knocking an audience out with her voice. If you don’t believe me, just watch/listen to some audience video clips that I found online.

Since she hasn’t released the album that she’s been working yet, I don’t know what the names of each of the songs are, but based on a setlist that I snagged from the stage, the songs performed were as follows:

Setlist (as handwritten by the band):

Taking pictures at this venue was particularly challenging. The sound engineer told me that he would raise the stage lights a bit for Nina’s set, but he let me know that the owner (I’m guessing his name is Alex) wanted the stage lights to be as dim as possible for ambience. Light is a photographer’s best friend. No light is a photographer’s worst enemy. I didn’t my best to adhere to a “no flash” policy because I can’t use flash when I get approved for other gigs, but I’ll have to admit that I did snap a few pics with a flash (about a half a song’s worth). I felt dirty afterwards. LOL. You can probably tell which shots had flash and which shots didn’t. Regardless, I hope you enjoy them all. 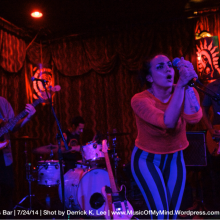 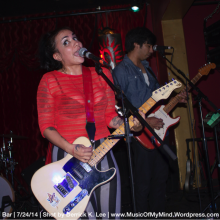 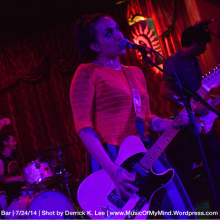 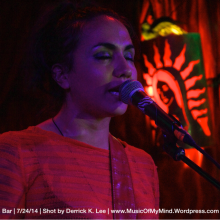 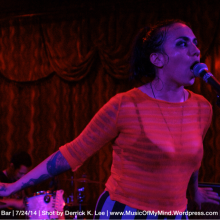