A highlight of the day, and my personal highlight!  Who are you, girl!?  It’s pronounced “T.K.,” and readers, you should probably remember that – her rapping is pure fire!  She killed it!  She sings, too.  Tkay combines pistol quick rap and EDM sounds, and her performance seemed effortless, which is a unique style trait to her . . . and she sounded like a boss!   Sure there are great rappers and rapid fire lyricists (not that many), but Tkay has her own style, too, ingénue-like, commanding, tough and effortless.   She is also reminiscent of M.I.A. and Azaelia Banks.   At times, Tkay’s tone and verbal rhythm, as well as her elocution and delivery, reminds me of M.I.A., but Tkay’s effortless brand of fierce is different because it’s definitive, hard and commanding, but less aggressive than M.I.A.  This artist is able to go from spitting out rap verses to singing verses.   Her elocution and delivery is also reminiscent of Azaelia when she puts vocals over electronic beats and I can see Tkay commanding the Coliseum (my measure of an LA Rave).  Tkay’s vocals and performance are unaffected, natural and unproduced, like she thought she’d just drop it right now .  From Australia, Zimbabwean Tkayo’s debut mix taped was released October 23, 2014.  I watched Tkay’s debut video for “U-Huh” and I loved it, but this 18 year old is so good, she doesn’t need all that production.   On stage – just her – done!  She had her first NYC performance this week and is being picked up by major online publications like Entertainment Weekly and Fader.   Check her out  – Rap, Pop, EDM sounds, like it’s no problem!  S/O to Derrick who knew this artist would be a highlight!  I had a chance to talk with Tkay after the show and she was sweet, in the moment and gracious to her fans – stay grounded girl you are about to be a star. 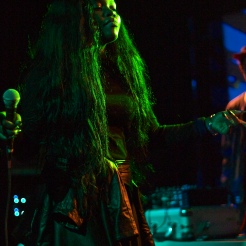 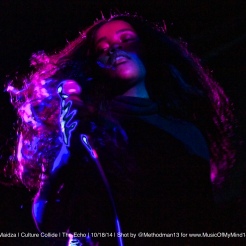