THOUGHTS: (Excerpted from M. Sloves full article which you can read by clicking HERE)

“[…] Bad Religion religion finally took the stage and started just as you’d expect them to: minimal bullshit, maximum intensity. At 50 these guys still look like freaking rock stars. Well, all of them except for Graffin. With his horn rimmed glasses held on by a pair of Chums, receding grey hairline, and an endearing middle aged dad-gut testing the tensile strength of his polo shirt, he looks more like a high school chemistry professor or an engineer from TRW. But it doesn’t really matter. Dude still runs the crowd like a G.

The set opened with “Fuck Armageddon… This is Hell”. For some reason my first impulse was to close my eyes. Kinda weird for me. But I wanted to eliminate the visual. Take everything out of the equation except for the sound. Verdict?

They’ve been doing this for so long – for decades – and yet it wasn’t even remotely stale. Instead it felt fast and crisp and …communal. Looking around The Mayan you could really feel the shared sense of stoke and mutual recognition that only happens when a group of people all bear witness to a voice that speaks truth to power.

During the front end of the set, there was very little hesitation. The band plowed forward, each song more classic than the last. But there were a few songs that hit a little harder than others. For me, the first moment where I really felt them pull at the heartstrings of nostalgia was when at about the quarter-mile mark when they burst into “Stranger than Fiction”. Hearing this song live was …electric. Literally raised the hair on my arms – and that’s not easy because I’m a hairy bitch. When they hit the chorus, I felt myself jerked straight back to UCSB circa ’97.  In our crash pad on Sabado Tarde, my Orange County brochachos and I weren’t always on the same page (I was both token Jew and token South Bay member of the house) but we always agreed on three things: Cantina Breakfast burritos, Seinfeld, and Bad Religion. Generator, Against the Grain, Recipe for Hate – these albums fueled many days and many more nights of benevolent ape-shittery …and why was this night different from any other night? Because Bad Religion was cramming 30 years of punk rock classics into a single evening of musical rad.

[…] And the crowd expressed its stoke by ditching the aforementioned bro-nods for a wholesome and healthy all-American mosh pit. It was long overdue and it was also cool to see the multi-generational makeup of the moshers coexisting and functioning on the same page. For me, it was precisely Bad Religion and Fishbone who many moons ago taught me the ethics and the essence of a proper mosh pit – a lesson lost on many a meathead who still doesn’t get it. Because it’s about communal expression, not individual testosterone. You move, you shove, you take an elbow, you throw an elbow, youslam – it’s violent, no doubt – but the intention is never to take someone out and when someone goes down, the obligation is always to help them back up.

It takes a village to rage. And inside the Mayan, the village was strong.

[…] The whole night felt like a series of reencounters. Every song gave me the feeling that I was bumping into an old friend or finding that missing sock I thought I’d lost at the laundromat. So recognizable. So familiar. Filling empty space where I didn’t know anything was missing. So many of their songs are so classic and so provocative that hearing them was like standing up straight and spreading my arms after sitting slouched and hunched over in front of computer screen for hours…days…years. It was liberating …and powerful.

I think I really felt it most when they played “New America”. What a kickass anthem! What a righteous call to arms. I mean, I’m cool listening to Taylor Swift sing about ex-boyfriends. I’m not a hater. But there’s a saturation point, isn’t there? Which always causes me to wonder: where is the political in popular music? Folk was swallowed up in the angst of singer/songwriters who can’t get laid. Funk got eaten by disco which was then euthanized in the 80s. Rap started political but by the late 90s it had largely cannibalized its own prophets. Rock has pretty much sucked since Rage Against the Machine (except maybe for System of a Down). What are we left with? Basically a lot of narcissism.

But punk continues to live in a largely political realm. It’s a purpose driven music that offers more than mere catharsis. It’s not all genius but when silverbacks like Graffin, Gurewitz, Dimkich, and Bentley hold it down, most of it is.

At one point Greg Graffin PhD looked up at the plaster cast Mayan carvings that line the walls of the theater and blurted out: “These hieroglyphs are not authentic.”

Maybe that one moment summed up the entire night. Bad Religion remains relevant because they remain authentic. When they scream “Fuck you!” it sounds just as urgent and outraged as it did 30 years ago. When 55 year olds and 22 year olds are packed shoulder to shoulder on the dance floor with their fists in the air screaming the chorus to every song, for one night at least, Los Angeles indeed is burning.” 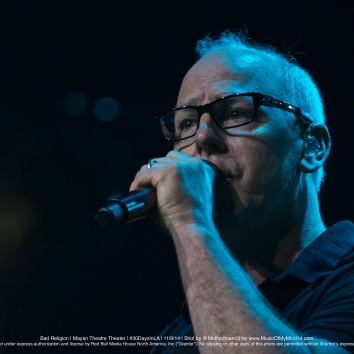 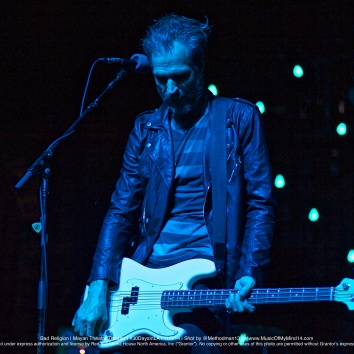 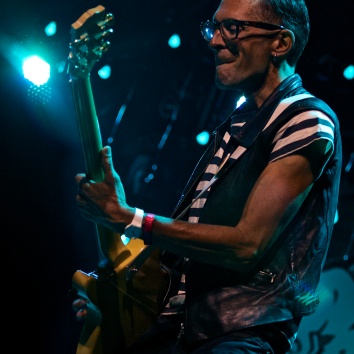 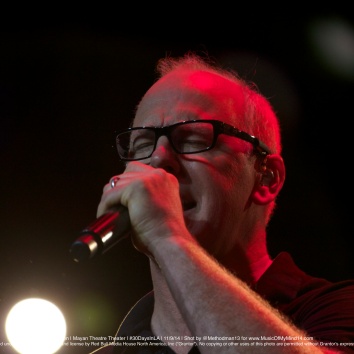 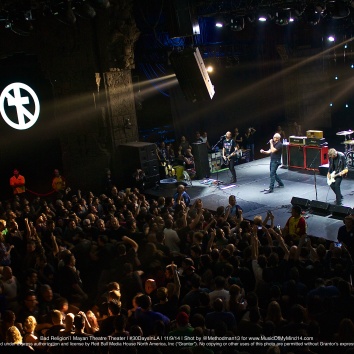 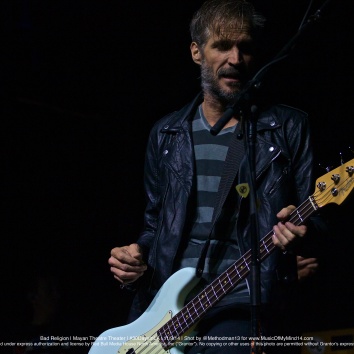